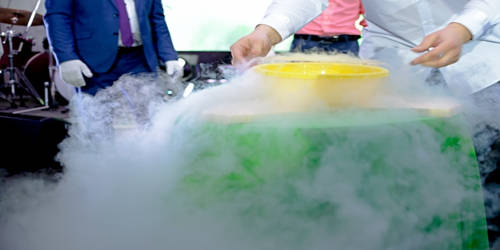 Liquid hydrogen is the liquid state of the element hydrogen. Hydrogen is found naturally in the molecular H2 form. It is light and has fewer potential risks compared with compressed gas in terms of storage pressure. It is normally vaporized into its gaseous state and piped into buildings for usage. It is a common form of storage and additional hazards should be taken into accounts such as frostbite burns, ice formation that may block vents and valves, contamination with solidified air, excessive overpressure generation and losses by continuous evaporation.

To exist as a liquid, H2 must be cooled below its critical point of 33 K. However, for it to be in a fully liquid state without boiling at atmospheric pressure, H2 needs to be cooled to 20.28 K (−252.87 °C; −423.17 °F). It is normally stored in on-site storage systems typically consisting of a tank, vaporizer, and controls. It is transported by liquid semitrailers with a capacity of 12,000 to 17,000 gallons. One common method of obtaining liquid hydrogen involves a compressor resembling a jet engine in both appearance and principle. Hydrogen undergoes a rapid phase change from liquid to gas, so ventilation and pressure relief devices are built into cryogenic hydrogen systems to ensure safety. It has a high operating cost due to the electricity needed for liquefaction, but lower capital costs depending on the quantity of hydrogen and the delivery distance.

Liquid hydrogen is typically used as a concentrated form of hydrogen storage. As for any gas, storing it as the liquid takes less space than storing it as a gas at normal temperature and pressure. It has been used as a fuel in space technology for several years. is used in large volumes in the space program as primary rocket fuel for combustion with oxygen or fluorine, and as a propellant for nuclear-powered rockets and space vehicles. However, the liquid density is very low compared to other common fuels. Once liquefied, it can be maintained as a liquid in pressurized and thermally insulated containers.

There are two spin isomers of hydrogen; liquid hydrogen consists of 99.79% parahydrogen and 0.21% orthohydrogen. Hydrogen gas is odorless and nontoxic but may produce suffocation by diluting the concentration of oxygen in air below levels necessary to support life.