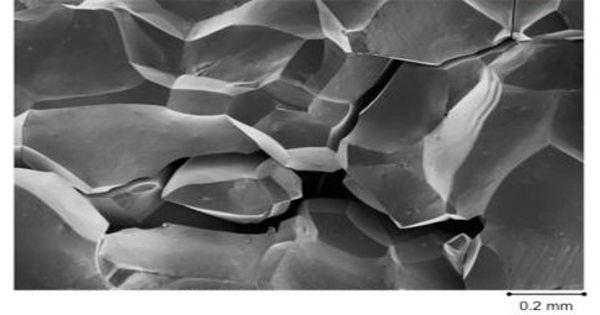 Liquid metal embrittlement (LME) is a phenomenon where metals that are usually ductile become prone to brittle intergranular failure after exposure to certain liquid metals. It is also known as liquid metal-induced embrittlement, which is a phenomenon of practical importance, where certain ductile metals experience drastic loss in tensile ductility or undergo brittle fracture when exposed to specific liquid metals. It is the reduction in the elongation to failure that can be produced when normally ductile solid metals are stressed while in contact with liquid metal.

Liquid Metal Embrittlement is the loss of ductility in normally ductile metals when stressed under contact with liquid metal. LME effects can also be observed even in the solid state when one of the metals is brought close to its melting point.

Generally, a tensile stress, either externally applied or internally present, is needed to induce embrittlement. The liquid metal gets absorbed into the material, causing its bond strength to decrease and cracking along its grain boundaries. Exceptions to this rule have been observed, as in the case of aluminium in the presence of liquid gallium. The general rules for the possible occurrence of liquid metal embrittlement are:

This phenomenon has been studied since the beginning of the 20th century. LME most commonly occurs in austenitic stainless steels, but it can afflict other copper, nickel, and aluminum alloys. Many of its phenomenological characteristics are known and several mechanisms have been proposed to explain it. Some significant examples of embrittling couples include: steel-Cu, stainless steel – Zn, aluminium-Hg.

The practical significance of liquid metal embrittlement is revealed by the observation that several steels experience ductility losses and cracking during hot-dip galvanizing or during subsequent fabrication. If susceptible equipment is exposed to molten metals, the cracking rates can be incredibly rapid and failure can occur within seconds of exposure. Cracking can occur catastrophically and very high crack growth rates have been measured. For example, molten zinc from galvanized steel parts or inorganic zinc coatings has been known to drip down on stainless steel equipment and LME. The minimal conditions required for LME of steels are:

The best way to prevent LME is to ensure that liquid metals never have an opportunity to come into contact with vulnerable metals. Similar metal embrittlement effects can be observed even in the solid-state when one of the metals is brought close to its melting point; e.g. cadmium-coated parts operating at high temperature. If metallic coatings or barriers are being used in a facility, be aware of the potential hazards and plan accordingly. This phenomenon is known as solid metal embrittlement.