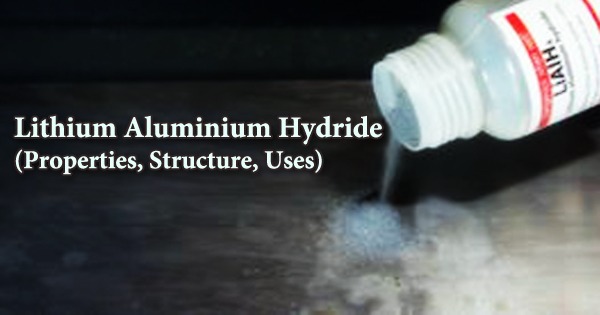 Lithium aluminium hydride, commonly abbreviated to LAH, is a white powder that turns gray when exposed to air. When spread out over a large flat combustible surface, friction can cause ignition. LiAlH4 is the chemical formula for this inorganic compound. Finholt, Bond, and Schlesinger discovered it in 1947. As a polymerization catalyst, a hydrogen source, and a propellant, it’s used to create other chemicals. The solid reacts violently with water, releasing gaseous hydrogen (H2). For hydrogen storage, several similar derivatives have been discussed.

LAH is a simple ionic molecule that functions as a strong and flexible reducing agent. It has a strong reducing impact. When exposed to a variety of oxidizing agents, they react violently. Friction ignites it, particularly if it’s powdered. Air, alcohols, and carboxylic acids all have a strong reaction with hydroxy compounds. It is stable in dry air at room temperature, decomposes above 125°C, slowly loses hydrogen at 120°C, decomposes in moist air, and can ignite when ground in air.

Lithium aluminium hydride is a colorless solid, but due to contamination, commercial samples are normally gray. Recrystallization from diethyl ether may be used to purify this content. Lithal is made up of a lithium ion (Li+) and an aluminium hydride (AlH4-) ion and has the formula LiAlH4. In essence, it’s the same as an ion of hydride (H-). Hydrogen has an oxidation number of +1 in most cases, except in hydrides (NaH, NaBH4, and LiAlH4), where it has an oxidation number of -1. When used to dry diethylene glycol dimethyl ether, it exploded violently: Ignition may have been triggered by heat produced by the reaction with impurity water, or by peroxide decomposition in the ether.

Lithal is normally a grey-colored solid when used, though it has been reported to be a white solid when free of impurities. The presence of small quantities of lithium hydride is thought to be responsible for the grey hue. Pyrophoric is the pure powdered stuff, but not the big crystals. Mineral oil is used in some commercial products to prevent reactions with ambient moisture, but it is most generally packed in moisture-proof plastic bags. When the blast happened, about 75% of the ether had been extracted. At high temperatures, it converts carbon dioxide or sodium hydrogen carbonate to methane and ethane.

LAH produces dihydrogen gas as it reacts violently with water, including ambient moisture. The reaction is defined by the idealized equation below:

Lithium aluminum hydride is a powder that ranges in color from white to gray. It’s a flammable solid with monoclinic crystals that turn grey when exposed to aluminum impurities; stable below 120°C in dry air; turns grey when exposed to moisture; hygroscopic; density: 0.917 g/cm3; melts at 190°C (decomposes); reacts with water and alcohols. At 25°C, it dissolves in diethylether and tetrahydrofuran (approximately 30 and 13 g/100g, respectively). Lithium aluminum hydride is soluble in dimethylcellosolve, sparingly soluble in dibutylether, slightly soluble in dioxane (1g/L), and virtually insoluble in hydrocarbons; crown ether can be used to solubilize it in benzene. Lithal is flammable and cannot be extinguished with water, sand, or carbon dioxide due to its reactions. Graphite, copper powder, or anhydrous solids such as NaCl, CaO, or LiCl may be used instead.

When using lithal, extreme caution is needed because even minor friction from a spatula has been known to cause accidents. It is always important to consult the safety data sheet before using any chemical. Reducing agent for over 60 different functional groups; transforms esters, aldehydes, and ketones to alcohols and nitriles to amines; source of hydrogen; propellant; catalyst in polymerizations. The reaction of lithium hydride with aluminum chloride in diethylether produces lithium aluminum hydride:

The monoclinic space group P21/c crystallizes in LAH. The measurements of the unit cell are: a = 4.82, b = 7.81, and c = 7.92 Å, α = γ = 90° and β = 112°. Lithal’s structure was initially difficult to determine due to the limited size of its hydrogen atoms. Powder diffraction was used to locate the ions, and neutron diffraction was used to locate the hydrogens, and the crystal structure was finally solved. Li+ centers are surrounded by five AlH4 tetrahedra in the structure. A bipyramid structure is formed when the Li+ centers are bonded to one hydrogen atom from each of the surrounding tetrahedra. A phase transition to β-LAH can occur at high pressures (>2.2 GPa).

The initial synthetic process of adding a diethyl ether solution of aluminum chloride to a slurry of lithium hydride is still used in commercial production of lithium aluminum hydride. Except for olefinic doublebonds, lithium aluminum hydride reduces almost all organic functional groups. It’s widely used in the pharmaceutical industry and in catalytic hydrogenation. In several ethereal solutions, LAH is soluble. However, due to the presence of catalytic impurities, it may spontaneously decompose; however, it appears to be more stable in tetrahydrofuran (THF).

Since it is used in flammable solvents including diethyl ether and tetrahydrofuran, lithium aluminum hydride poses an additional fire risk. It should not be used to dry methyl ethers or tetrahydrofuran because fires are very likely as a result of this. The lithium hydride is suspended in anhydrous diethyl ether, in which the aluminium chloride is dissolved. The reaction mixure requires continuous stirring to avoid lithal forming as a crust on top of the solution or as a sediment. The reaction takes place in an inert atmosphere (nitrogen or argon) at 70°C under reflux. After about an hour, the reaction is complete, and the by-product lithium chloride, a white solid, is filtered off. Rotatory evaporation is then used to extract lithium from the filtrate.

Lithal is sold commercially as a powder that is contained in an inert atmosphere in a plastic bag inside a steel can. One of the most effective industrial reducing agents is lithium aluminum hydride. It’s widely used in organic synthesis as well as catalytic hydrogenation. Reactant or reagent for:

The skin, eyes, and mucous membranes are all extremely corrosive to lithium aluminum hydride. Lithium hydroxide is formed when lithium is exposed to moisture, and it can cause serious burns. Lithal produces hydrogen gas as it reacts violently with water. As a result, all of its reactions must be carried out in anhydrous solvents in an inert and dry environment. LAH that has been powdered will produce dusts that are hazardous to inhale. This drug can cause aching muscles, nausea, vomiting, dizziness, and unconsciousness, as well as being fatal if consumed. Since hydrogen is formed during digestion, it may cause a gas embolism.

At high temperatures, lithium aluminum hydride can react explosively with carbon dioxide in sodium bicarbonate. Since the Al-H bond is weaker than the B-H bond, it is more strong than the associated reagent sodium borohydride. It converts esters, carboxylic acids, acyl chlorides, aldehydes, and ketones into the corresponding alcohols as a solution in diethyl ether followed by an acid workup. Lithium aluminum hydride should not be used as a solvent drying agent because it can easily cause fires. Extinguish lithium aluminum hydride fires with dry chemical powder or sand. On a LAH burn, never use water or carbon dioxide extinguishers.