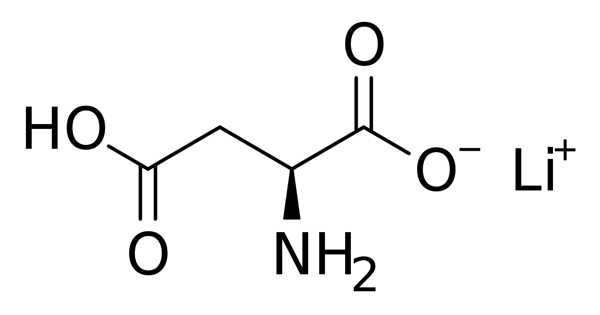 Lithium Aspartate – a Salt of Aspartic Acid and Lithium

Lithium is a trace element that occurs naturally in a variety of foods, including grains and vegetables. The salt of aspartic acid and lithium (C4H6LiNO4) is lithium aspartate (C4H6LiNO4). It is sometimes marketed as a dietary supplement used in small doses to treat certain medical conditions; however, there are no systematic reviews supporting the efficacy or safety of lithium aspartate, and it is not approved by the United States Food and Drug Administration (FDA) for any medical condition. There has been little published research on lithium aspartate.

It is the lightest solid metal, soft and silvery-white, with a low melting point and high reactivity. Many of its physical and chemical properties resemble those of alkaline earth metals rather than those of its own group. Among the most important properties of lithium are its high specific heat (calorific capacity), the wide temperature range in the liquid state, high thermal conductivity, low viscosity, and extremely low density. Metallic lithium is soluble in aliphatic amines with short chains, such as etilamine. In hydrocarbons, it is insoluble.