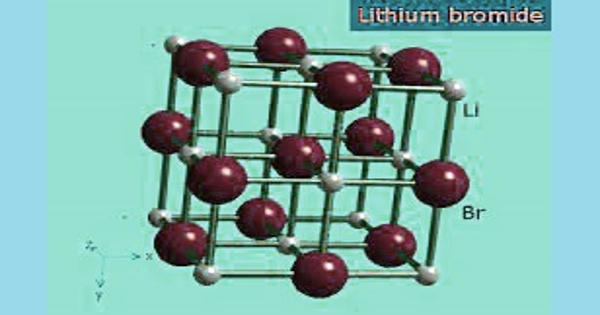 Lithium bromide – a chemical compound of lithium and bromine

Lithium bromide (LiBr) is a chemical compound of lithium and bromine. It is an extremely hygroscopic chemical commonly used in absorption chillers, where water is the refrigerant. Its extreme hygroscopic character makes LiBr useful as a desiccant in certain air conditioning systems. Because of its high affinity to water, LiBr can easily absorb excess vapor, making the system an environmentally friendly non-CFC alternative.

LiBr is soluble in water, alcohol, and ether. It is prepared by treating an aqueous suspension of lithium carbonate with hydrobromic acid or by reacting lithium hydroxide with bromine. It is prepared by the action of hydrobromic acid on lithium hydroxide. The salt forms several crystalline hydrates, unlike the other alkali metal bromides. Aqueous solutions of lithium bromide have usually low water vapor pressures. The anhydrous salt forms cubic crystals are similar to common salt (sodium chloride).

Lithium bromide reacts with silver nitrate forms lithium nitrate and silver bromide. The chemical equation is given below.

Lithium salts are psychoactive and somewhat corrosive. Heat is quickly generated when lithium bromide is dissolved into water because it has a negative enthalpy of solution.