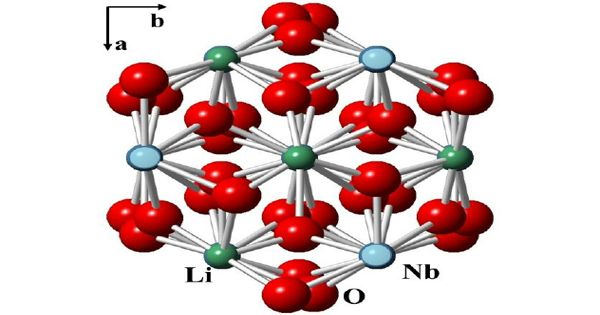 Lithium niobate (LiNbO3) is a ferroelectric material with excellent electro-optic, nonlinear optical, and piezoelectric properties. It is a non-naturally-occurring salt consisting of niobium, lithium, and oxygen. It is widely used in integrated and guided-wave optics because of its favorable optical, piezoelectric, electro-optic, elastic, photoelastic, and photorefractive properties.

Lithium niobate is a ferroelectric compound having the ilmenite structure and of potential interest as an electroceramic. It is a non-naturally-occurring salt consisting of niobium, lithium, and oxygen.

Its single crystals are an important material for optical waveguides, mobile phones, piezoelectric sensors, optical modulators, and various other linear and non-linear optical applications. It is one of the most thoroughly characterized electro-optic materials, and Inrad Optics’ crystal growing techniques consistently produce large lithium niobate crystals of exceptional quality. Lithium niobate is sometimes referred to by the brand name linobate.

Lithium niobate is a colorless solid, and it is insoluble in water. It is a crystalline material whose physical properties change in response to pressure or the presence of an electric field and which is used in fiber optics and as a synthetic gemstone. It has a trigonal crystal system, which lacks inversion symmetry and displays ferroelectricity, the Pockels effect, the piezoelectric effect, photoelasticity, and nonlinear optical polarizability.

The most attractive features of lithium niobate are its optical properties and electro-optical effect. It has negative uniaxial birefringence which depends slightly on the stoichiometry of the crystal and on temperature. It is transparent for wavelengths between 350 and 5200 nanometers.

Lithium niobate can be doped by magnesium oxide, which increases its resistance to optical damage (also known as photorefractive damage) when doped above the optical damage threshold. It is the lithium salt of niobic acid, whose transparent crystals are used in lasers and other optical devices. Other available dopants are Fe, Zn, Hf, Cu, Gd, Er, Y, Mn, and B.

Lithium niobate has a broad transmission range from the visible to the mid-infrared and can be used for a variety of electro-optical and nonlinear optical applications. It is a useful material for optoelectronics. Many technologies are based on this material which has unique piezo-electric, optical and photoelastic properties while exhibiting mechanical and chemical stability. The main applications are in optical modulation, wavelength conversion for SHG lasers, PPLN, and more.