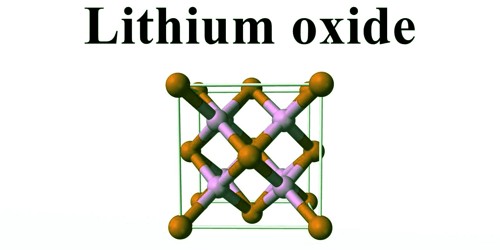 Lithium oxide (Li2O) or lithia is an inorganic chemical compound. It is a white inorganic chemical compound. Although not specifically important, many materials are assessed on the basis of their Li2O content. Lithium oxide is produced by thermal dehydration of lithium hydroxide. For example, the Li2O content of the principal lithium mineral spodumene (LiAlSi2O6) is 8.03%. Although not explicitly important, many materials are evaluated based on the lithium oxide content in them. It a white powder, with strong alkaline properties: used in ceramics and glass.

Lithium oxide is a white crystalline compound. It absorbs carbon dioxide and water vapor. It forms the solid solution in magnetite accelerated the magnetite phase reduction.

Lithium oxide is produced by the thermal decomposition of lithium peroxide at 300-400°C. It was measured in the temperature range from 814 to 970 K in vacuum by means of a thermo-balance. It forms when lithium metal burns in the presence of oxygen. Furthermore, these compounds (oxides compounds) are not conductive to electricity.

Lithium oxide forms along with small amounts of lithium peroxide when lithium metal is burned in the air and combines with oxygen:

Pure Li2O can be produced by the thermal decomposition of lithium peroxide, Li2O2, at 450°C

Lithium oxide is used as a flux in ceramic glazes and creates blues with copper and pinks with cobalt. It is a highly insoluble thermally stable source of lithium suitable for making glass, ceramics, and optics. Lithium oxide reacts with water and steam, forming lithium hydroxide and should be isolated from them. Its usage is also being investigated for non-destructive emission spectroscopy evaluation and degradation monitoring within thermal barrier coating systems. At high heat, lithium oxide emits a very detectable spectral pattern, which increases in intensity along with degradation of the coating. In summary,