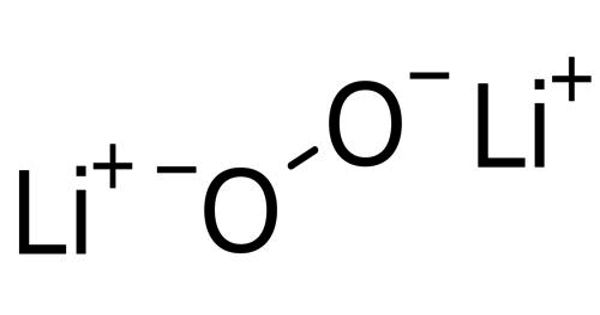 Lithium peroxide is the inorganic compound with the formula Li2O2. It is the compound,  that is used to remove carbon dioxide from the air and replace it with oxygen. It appears as a white powder or sandy yellow granular solid. Irritates skin, eyes, and mucous membranes. It is a white, nonhygroscopic solid. Because of its high oxygen: mass and oxygen: volume ratios, the solid has been used to remove CO2 from the atmosphere in spacecraft.

It is prepared by the reaction of hydrogen peroxide and lithium hydroxide. This reaction initially produces lithium hydroperoxide:

This lithium hydroperoxide has also been described as lithium peroxide monoperoxohydrate trihydrate (Li2O2·H2O2·3H2O). Dehydration of this material gives the anhydrous peroxide salt:

Li2O2 decomposes at about 450 °C to give lithium oxide:

The structure of solid Li2O2 has been determined by X-ray crystallography and density functional theory. The solid features an eclipsed “ethane-like” Li6O2 subunits with an O-O the distance of around 1.5 Å.

The decomposition of Li2O2·H2O2·2H2O to lithium peroxide at 50 and 75°C proceeds with intermediate formation of the compounds Li2O2·H2O2·H2O and Li2O2·H2O2. 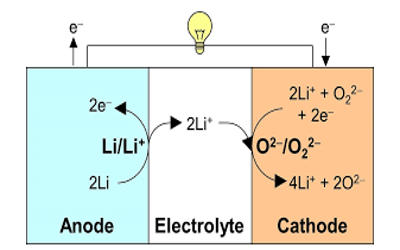 It is used in air purifiers where weight is important, e.g., spacecraft to absorb carbon dioxide and release oxygen in the reaction:

It absorbs more CO2 than does the same weight of lithium hydroxide and offers the bonus of releasing oxygen. Furthermore, unlike most other alkali metal peroxides, it is not hygroscopic.

The reversible lithium peroxide reaction is the basis for a prototype lithium-air battery. Using oxygen from the atmosphere allows the battery to eliminate the storage of oxygen for its reaction, saving battery weight and size. The development of effective electrocatalysts and a corresponding working mechanism during cycling are critically important for lithium-oxygen batteries. While lithium-ion batteries have a limit on their optimization that most likely will not meet our future needs, researchers have been focused on novel chemistries beyond lithium-ion batteries.