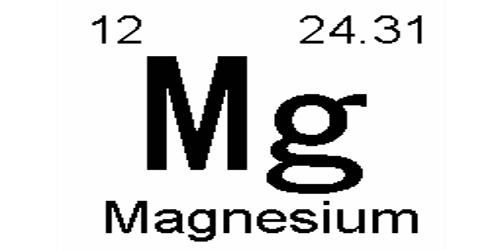 Magnesium is a chemical element with the symbol Mg and atomic number 12. It is a light, silvery-white, and fairly tough metal. It is a moderately hard, silvery-white metal. It is a shiny gray solid which bears a close physical resemblance to the other five elements in the second column (group 2, or alkaline earth metals) of the periodic table: all group 2 elements have the same electron configuration in the outer electron shell and a similar crystal structure. It is the eighth-most abundant element in Earth’s crust (about 2.5 percent) and is, after aluminum and iron, the third most plentiful structural metal. It is the lightest of all structural metals.

Magnesium is the ninth most abundant element in the universe. Classified as an alkaline earth metal, magnesium is a solid at room temperature. It is produced in large, aging stars from the sequential addition of three helium nuclei to a carbon nucleus. It is very chemically active, it takes the place of hydrogen in boiling water and a great number of metals can be produced by thermic reduction of its salts and oxidized forms with magnesium. When such stars explode as supernovas, much of the magnesium is expelled into the interstellar medium where it may recycle into new star systems. Magnesium is the eighth-most abundant element in the Earth’s crust and the fourth most common element in the Earth, making up 13% of the planet’s mass and a large fraction of the planet’s mantle.  Used as a catalyst, magnesium promotes organic reactions of condensation, reduction, addition, and dehalogenation.

Magnesium occurs naturally only in combination with other elements, where it invariably has a +2 oxidation state. It also occurs in large amounts dissolved in ocean waters. The free element (metal) can be produced artificially and is highly reactive. The free metal burns with a characteristic brilliant-white light. Magnesium is less dense than aluminum, and the alloy is prized for its combination of lightness and strength. The melting point of magnesium is 651°C (1,200°F) and its boiling point is 1,100°C (2,000°F). Its density is 1.738 grams per cubic centimeter.