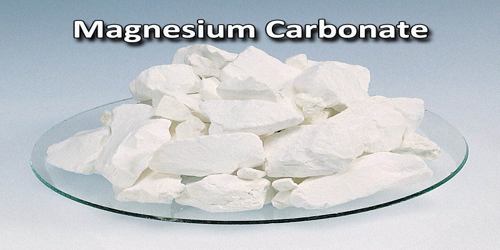 Magnesium carbonate (MgCO3) is a white or brown crystalline solid or crystalline powdery compound that occurs naturally as dolomite and magnesite and is widely marketed as a health supplement. It is an important ore for magnesium. Used in the manufacture of materials capable of withstanding very high temperatures. Sometimes used to produce carbon dioxide. Magnesium carbonate has a wide array of medicinal properties above and beyond its role in the prevention and treatment of magnesium deficiency. Magnesium is an essential nutrient that takes part in a number of physiological processes. It is interlocked with calcium, where one of these minerals helps to control the activity of the other. Because of its ability to temper calcium’s activity, magnesium has been called nature’s calcium channel blocker. After potassium, magnesium is the second most abundant electrolyte within the cell. Properties and Reactions of Magnesium Carbonate

High purity industrial routes include a path through magnesium bicarbonate, which can be formed by combining slurry of magnesium hydroxide and carbon dioxide at high pressure and moderate temperature.

The decomposition temperature is given as 350 °C (662 °F). However, calcination to the oxide is generally not considered complete below 900 °C due to interfering readsorption of liberated carbon dioxide. Magnesium Carbonate is used in the treatment of:

Magnesium Carbonate is used in the prevention of:

This medication may be prescribed for other uses.

The primary use of magnesium carbonate is the production of magnesium oxide by calcining. Magnesite and dolomite minerals are used to produce refractory bricks. MgCO3 is also used in flooring, fireproofing, and fire extinguishing compositions, cosmetics, dusting powder, and toothpaste. Other applications are as filler material, smoke suppressant in plastics, a reinforcing agent in neoprene rubber, a drying agent, a laxative to loosen the bowels, and color retention in foods. In addition, high purity magnesium carbonate is used as antacid and as an additive in table salt to keep it free flowing.