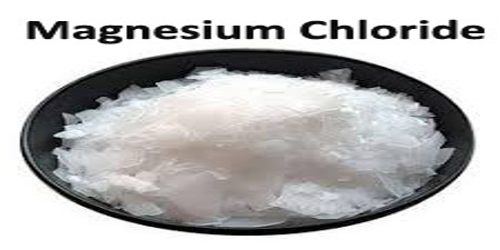 Magnesium Chloride is recognized by many medical professionals as the “Master Magnesium Compound” for both dietary and topical uses, due to its high potency and efficient action. Magnesium is undeniably therapeutic to the human body, yet much is left unsaid about the type and quality of various forms of magnesium.

Structure and Properties of Magnesium Chloride

Magnesium chloride is an inorganic compound containing the elements magnesium and chlorine. It is crystallizes in the cadmium chloride motif, which features octahedral Mg. A variety of hydrates are known with the formula MgCl2(H2O)x, and each loses water with increasing temperature: x = 12 (−16.4 °C), 8 (−3.4 °C), 6 (116.7 °C), 4 (181 °C), 2 (ca. 300 °C). In the hexahydrate, the Mg2+ remains octahedral, but is coordinated to six water ligands. The thermal dehydration of the hydrates MgCl2(H2O)x (x = 6, 12) does not occur straightforwardly. Magnesium Chloride is a colorless crystalline compound. The salt is very hygroscopic. It has density of 2.325 g/cm3 (anhydrous), 1.56 g/cm3 (hexahydrate) and a high melting point of 987 K. Magnesium chloride hexahydrate is only stable below 373 K and decomposes at 391 K. The compound well dissolves in water with solubility of 35.5g per 100g H2O at 298 K. Dissolving MgCl2 is an exothermic process.

Magnesium chloride is very corrosive to the metal surfaces of automobiles and causes rust if left on the vehicle for a long period of time. It is thicker than sodium chloride, so it sticks to a car’s finish and is almost impossible to wash off. The application of a magnesium chloride solution to external wounds had favorable effects over leucocytic activity and phagocytosis, making it ideal for wound cleansing. Oral magnesium chloride was a powerful immuno-stimulant, exhibiting a broad tonic effect on the host.