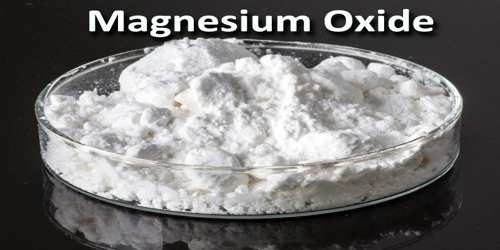 Magnesium oxide is the oxide salt of magnesium with antacid, laxative and vascular smooth muscle relaxant activities. It is an inorganic compound that occurs in nature as the mineral periclase. In aqueous media combines quickly with water to form magnesium hydroxide. Magnesium oxide is used as an antacid and mild laxative and has many nonmedicinal uses. It has an empirical formula of MgO and consists of a lattice of Mg2+ ions and O2− ions held together by ionic bonding. Magnesium hydroxide forms in the presence of water (MgO + H2O → Mg(OH)2), but it can be reversed by heating it to separate moisture. Production and Applications of Magnesium Oxide

Magnesium oxide is only found in individuals that have used or taken this drug. It is an inorganic compound that occurs in nature as the mineral periclase. In aqueous media combines quickly with water to form magnesium hydroxide. It is produced by the calcination of magnesium carbonate or magnesium hydroxide. The latter is obtained by the treatment of magnesium chloride solutions, typically seawater, with lime.

The total energy required to produce one tonne of magnesium is around 35 to 40 MWhour for both the electrolytic and thermal routes. The electrolysis only step component ranges down to just 12 MWhour per tonne with the latest technology with the balance being thermal energy including that required for the production of lime, drying and billet production. The thermal reduction processes as described below requires a higher proportion of electrical energy with approximately the same amount of energy. The electrolytic route will benefit from integration with a petchem project that could consume the chlorine by-product. Three basic types or grades of “burned” magnesium oxide can be obtained from the calcination step with the differences between each grade related to the degree of reactivity remaining after being exposed to a range of extremely high temperatures.

The chemical properties of magnesium oxide nanoparticles are outlined in the following table.

Magnesium oxide nanoparticles can be applied in electronics, catalysis, ceramics, petrochemical products, coatings and many other fields. Magnesium oxide nanoparticles can be used along with wood chips and shavings to make materials such as sound-proof, light-weight, heat-insulating and refractory fiber board and metallic ceramics. It is used as an antacid and mild laxative and has many nonmedicinal uses.