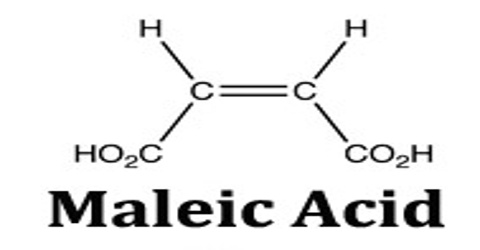 Maleic acid is a geometric isomer of fumaric acid, having two carboxyl groups (COOH) on the same side of an ethylene chain. It is a colorless crystalline acid used in textile processing and as an oil and fat preservative. Its chemical formula is HO2CCHCHCO2H. It is the cis-isomer of butenedioic acid, whereas fumaric acid is the trans-isomer. Maleic acid is an organic salt or ester of maleic acid that could be conjugated to free base compounds/drugs to improve the physiochemical properties including stability, solubility and dissolution rate. The maleate ion is useful in biochemistry as an inhibitor of transaminase reactions. Maleic acid esters are also called maleates, for instance dimethyl maleate.

Maleic acid shows reactions typical of both olefins and carboxylic acids. Commercially important reactions of the acid groups include esterification with glycols to polyesters and dehydration to the anhydride. The double bond is involved in conversions to fumaric acid, to sulfosuccinic acid (used in wetting agents), and to Malathion (an insecticide).

Production and Properties of Maleic Acid Maleic acid melts at 139–140° C (282–284° F); at higher temperatures it forms the anhydride, which, like the acid, is irritating to the skin and toxic. The physical properties of maleic acid are very different from that of fumaric acid.

Maleic acid is soluble in water whereas fumaric acid is not and the melting point of maleic acid (130 – 131 degree centigrade) is also much lower than that of fumaric acid (287 degree centigrade). Both properties of maleic acid can be explained on account of the intramolecular hydrogen bonding that takes place at the expense of intermolecular interactions. It is converted into maleic anhydride by dehydration, to malic acid by hydration, and to succinic acid by hydrogenation. Maleic acid may be used to form acid addition salts with drugs to make them more stable, such as indacaterol maleate. It is also used as an adhesion promoter for different substrates, such as nylon and zinc coated metals e.g galvanized steel, in methyl methacrylate based adhesives.