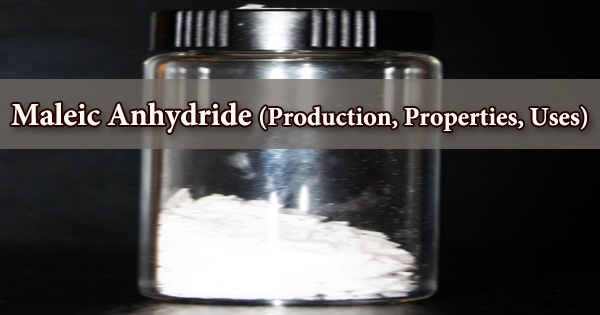 Colorless crystalline needles, flakes, pellets, rods, briquettes, lumps, or a fused mass are all forms of maleic anhydride (MAN). It’s an organic chemical with the formula C2H2(CO)2O; it’s the acid anhydride of maleic acid, and it’s a colorless or white solid with an unpleasant odor in its pure condition. At 113°F, it melts; it may be sent in a solid or molten form. Strong irritants such as vapors, fumes, and dust irritate the eyes, skin, and mucous membranes. MAN is manufactured on a huge scale in the industrial sector for use in coatings and plastics.

Maleic anhydride is a fascinating molecule since it has two chemical functions, making it very valuable in chemical production and applications. The vapor-phase oxidation of n-butane produces it. The backbone is dehydrogenated and the methyl groups are converted to carboxylate. The resilience of maleic anhydride, with its conjugated double-bond structure, is reflected in the process’ selectivity. Maleic anhydride was formerly made by oxidizing benzene or other aromatic chemicals. MAN is a versatile chemical intermediate that may be used in a variety of chemical processes. Its major end-use is as feedstock in the production of unsaturated polyester resins (UPR).

Both glass-reinforced and unreinforced applications employ these resins. A wide range of applications in the construction, maritime, and car sectors are among the UPR end uses. Benzene and butane are supplied into a stream of hot air in both situations, and the combination is pushed through a high-temperature catalyst bed. To prevent the mixture from igniting, the air-to-hydrocarbon ratio is regulated. For the benzene pathway, vanadium pentoxide and molybdenum trioxide are employed, whereas for the butane route, vanadium phosphate is used:

The primary competitive method involves complete butane combustion, which is twice as exothermic as partial oxidation. Maleic anhydride is the cyclic anhydride of maleic acid, which is a cyclic dicarboxylic anhydride. It functions as an allergen. It’s a cyclic dicarboxylic anhydride that belongs to the furans family. 116 gm (1.0 mole) maleic acid and 120 ml tetrachloroethane are introduced to a flask fitted with a Dean-Stark trap, condenser, and mechanical stirrer. The ingredients are heated, the water (18 ml, 1.0 mole) is distilled off as the azeotrope, and the remainder is distilled under reduced pressure to yield 87.7 gm (89.5%) of the anhydride, with a boiling point of 82-84°C (15 mm) and a melting point of 53°C.

The residual in the flask is roughly 10 gm of fumaric acid with a melting point of 287°C. Used to create paints, polymers, and other compounds, with a flashpoint of 218°F and an autoignition temperature of 890°F. Furthermore, when utilizing benzene (6 carbon atoms) to make maleic anhydride (4 C-atoms), a third of the initial carbon atoms are lost as carbon dioxide. On heating, both fumaric and maleic acids produce maleic anhydride. Prior to dehydration, fumaric acid must be heated to a higher temperature in order to convert to maleic acid.

Modern catalytic reactions start with a four-carbon molecule and simply add oxygen and remove water; the molecule’s four-carbon base body stays intact. As a result, the modern approach is more material-efficient. Maleic anhydride exposure can arise as a result of unintentional leaks into the environment or in workplaces where it is manufactured or utilized. Acute (short-term) inhalation exposure to maleic anhydride has been shown to produce respiratory tract irritation as well as ocular irritation in humans. It’s a cyclic molecule produced by catalytic oxidation of benzene or its derivatives at high temperatures, having a ring comprising four carbon atoms and one oxygen atom. It is primarily utilized in the production of alkyd and polyester resins, as well as copolymers.

In workers, chronic (long-term) exposure to maleic anhydride has been linked to chronic bronchitis, asthma-like episodes, and irritation of the upper respiratory tract and eyes. Allergies have developed in certain persons to the point that lesser doses are no longer tolerated. In rats persistently exposed to maleic anhydride by gavage, kidney consequences were reported (experimentally placing the chemical in the stomach). In Diels-Alder reactions, maleic anhydride is a strong dienophile. It is also a ligand for low-valent metal complexes, examples being Pt(PPh3)2(MA) and Fe(CO)4(MA).

In a photochemical process, maleic anhydride (MAN) dimerizes to create cyclobutane tetracarboxylic dianhydride (CBTA). This substance is utilized in the manufacture of polyimides and as a liquid crystal display alignment film. At temperatures over 150 °C, MAN decomposes exothermically, emitting carbon dioxide in the presence of dimethylamine, triethylamine, pyridine, or quinoline. Unsaturated polyester resins (UPR) account for almost half of the world’s maleic anhydride production. Fiberglass reinforced plastics are made by mixing chopped glass fibers with UPR and are utilized in a variety of applications including pleasure boats, bathroom fittings, cars, tanks, and pipelines.

When maleic anhydride comes into touch with oxidizing elements, it reacts violently. When exposed to water or steam, it produces an exothermic reaction. It generates bitter smoke and unpleasant odors when heated to breakdown (over 150 °C). Maleic anhydride is converted to 1,4-butanediol (BDO), which is used to make thermoplastic polyurethanes, elastane/Spandex fibers, PBT resins, and a variety of other goods. In the Diels-Alder process to generate phthalate ester derivatives, it is known to be an excellent dienophile.