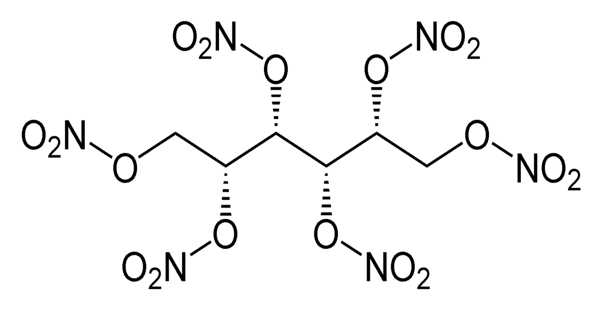 Mannitol hexanitrate is a highly explosive substance. It is a type of monosaccharide. It is an explosive crystalline ester C6H8(NO3)6 formed by nitration of mannitol and used in the treatment of angina pectoris and vascular hypertension when combined with a carbohydrate (as lactose).

At normal temperatures, it is a powdery solid with a density of 1.73 g/cm3. Hexanitromannitol is the chemical name, and it is also known as nitromannite, MHN, and nitromannitol, as well as by the trademarks Nitranitol and Mannitrin. It has higher stability than nitroglycerin and is used in detonators.

Preparing pure MHN is a difficult task because most preparations result in a mixture of MHN and lower esters (pentanitrate and lower). It is an explosive compound formed by the nitration of mannitol; when diluted with carbohydrate substances (one-part mannitol hexanitrate to nine or more parts carbohydrate), it is not explosive and is used as a vasodilator and hypotensive agent; its action is slower than that of nitroglycerin; it acts through the formation of nitric oxide.

Mannitol hexanitrate is a secondary explosive created by nitrating mannitol, sugar alcohol. The product is used as a vasodilator in medicine and as an explosive in blasting caps. It has a high sensitivity, especially at high temperatures (> 75 °C), where it is slightly more sensitive than nitroglycerine. Nitromannite is classified as a Class B explosive.

Mannitol hexanitrate is not widely available, and obtaining it requires a license. The production of pure MHN is a difficult task because most preparations yield a mixture of MHN and lower esters (pentanitrate and lower).