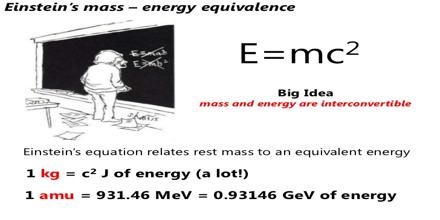 Major objective of this lecture is to present on Mass Energy Calculations. The change of energy is related to the change in mass, according to the mass-energy equivalence relation derived by Albert Einstein in 1905. Energy and mass are equivalent and related by the equation; E = mc². The equivalence of mass and energy explains the fact that the mass of an atom is always less than the sum of the masses of its constituent particles. When nucleons come together to form a stable nucleus, energy is released. According to Einstein’s equation, there must be a corresponding decrease in mass.