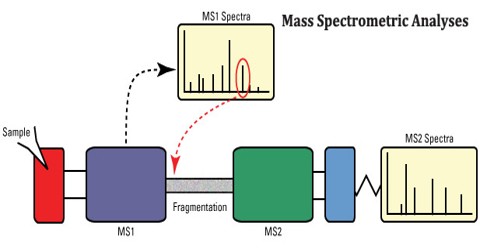 Mass Spectrometry (MS) is currently being implemented in a wide spectrum of research and industrial areas, such as materials science, cosmo- and geochemistry, biology and medicine, to name just a few. Research and development in nuclear safeguards is closely related to the general field of “Peace Research”, representing a specific application area for analytical sciences in general and for mass spectrometry in particular. The importance of the complementary information in the mass spectrometry survey scans as well as the different tandem mass spectrometry techniques. Mass Spectrometry (MS) measures the mass-to-charge ratio of ions to identify and quantify molecules in simple and complex mixtures. MS has become invaluable across a broad range of fields and applications, including proteomics. The development of high-throughput and quantitative MS proteomics workflows within the last two decades has expanded the scope of what we know about protein structure, function, modification and global protein dynamics.

Along with the analysis of element amounts and isotopic compositions of uranium and plutonium in nuclear material the challenging applications of mass spectrometry include isotopic analysis of micro-samples, age determination of nuclear material as well as identification and quantification of elemental and isotopic signatures of inspection samples in general. Analysis of inspection samples implies strict quality control procedures and it demands the production of suitable certified isotopic reference materials which are used as calibration standards or as quality control samples.

A mass spectrum is a plot of the ion signal as a function of the mass-to-charge ratio. These spectra are used to determine the elemental or isotopic signature of a sample, the masses of particles and of molecules, and to elucidate the chemical structures of molecules, such as peptides and other chemical compounds. Mass Spectrometry is a sensitive technique used to detect, identify and quantitate molecules based on their mass and charge (m/z) ratio. Originally developed almost 100 years ago to measure elemental atomic weights and the natural abundance of specific isotopes, MS was first used in the biological sciences to trace heavy isotopes through biological systems; later on, MS was used to sequence oligonucleotides and peptides and analyze nucleotide structure. In assigning mass values to atoms and molecules, we have assumed integral values for isotopic masses. However, accurate measurements show that this is not strictly true. Because the strong nuclear forces that bind the components of an atomic nucleus together vary, the actual mass of a given isotope deviates from its nominal integer by a small but characteristic amount (remember E = mc2). Thus, relative to 12C at 12.0000, the isotopic mass of 16O is 15.9949 amu (not 16) and 14N is 14.0031 amu (not 14). By designing mass spectrometers that can determine m/z values accurately to four decimal places, it is possible to distinguish different formulas having the same nominal mass. The table on the right illustrates this important feature, and a double-focusing high-resolution mass spectrometer easily distinguishes ions having these compositions..

Applications and Fields of Mass Spectrometry

Mass spectrometry (MS) measures the m/z ratio of ions to identify and quantify molecules in simple and complex mixtures. MS has become invaluable across a broad range of fields and applications, including proteomics. Common applications and fields that use mass spectrometry: