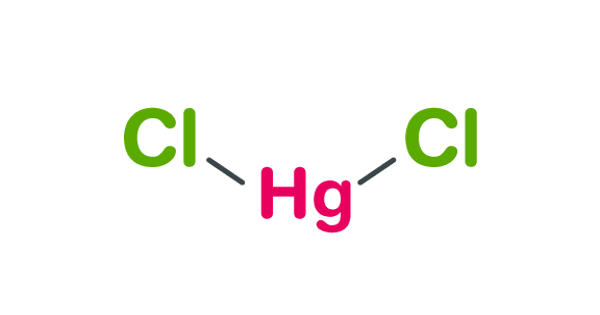 Mercuric chloride – a chemical compound of mercury and chlorine

Mercuric chloride appears as an odorless white crystalline solid. It is also known as Mercury (II) chloride is the chemical compound of mercury and chlorine with the formula HgCl2. It is an odorless, white, crystalline powder with a metallic taste. It is a white crystalline solid and is a laboratory reagent and a molecular compound that is very toxic to humans. At 25°C, it has a density of 5.4. It melts at 277°C and sublimes unchanged at about 300°C.

Once used as a treatment for syphilis, it is no longer used for medicinal purposes because of mercury toxicity and the availability of superior treatments.

Mercuric chloride is obtained by the action of chlorine on mercury or on mercury(I) chloride. It is soluble in ethanol, methanol, acetone, ethyl acetate, and diethyl ester. It is slightly soluble in acetic acid, pyridine, and carbon disulfide. It can also be produced by the addition of hydrochloric acid to a hot, concentrated solution of mercury(I) compounds such as the nitrate:

Heating a mixture of solid mercury(II) sulfate and sodium chloride also affords volatile HgCl2, which can be separated by sublimation. It is unstable in the presence of alkalies and is decomposed to metallic mercury by sunlight in the presence of organic matter.

Mercuric chloride exists not as a salt composed of discrete ions, but rather is composed of linear triatomic molecules, hence its tendency to sublime. It is a highly toxic compound that volatizes slightly at ordinary temperature and appreciably at 100 degrees C. In the crystal, each mercury atom is bonded to two chloride ligands with Hg—Cl distance of 2.38 Å; six more chlorides are more distant at 3.38 Å. It is corrosive to mucous membranes and used as a topical antiseptic and disinfectant.

Mercuric chloride is extremely toxic, both acutely and as a cumulative poison. Mercuric chloride is primarily a skin and mucous membrane irritant that is rapidly absorbed. Its toxicity is due not just to its mercury content but also to its corrosive properties, which can cause serious internal damage, including ulcers to the stomach, mouth, and throat, and corrosive damage to the intestines. Acute poisoning by ingestion or inhalation may cause severe nausea, vomiting, hematemesis, abdominal pain, diarrhea, melena, renal damage, and prostration.

Mercuric chloride also tends to accumulate in the kidneys, causing severe corrosive damage which can lead to acute kidney failure. However, mercuric chloride, like all inorganic mercury salts, does not cross the blood-brain barrier as readily as organic mercury, although it is known to be a cumulative poison.