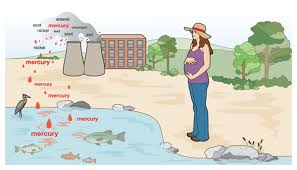 Mercury poisoning (also known as mercurialism, hydrargyria, Hunter-Russell syndrome, or acrodynia when affecting children) is a disease caused by exposure to mercury or its toxic compounds. Mercury is a cumulative heavy metal poison which occurs in its elemental form, inorganically as salts, or organically as organ mercury compounds; the three groups vary in effects due to differences in their absorption and metabolism, among other factors. However, with sufficient exposure all mercury-based toxins damage the central nervous system and other organs or organ systems such as the liver or gastrointestinal tract.

Mercury poisoning is the ill effects on human’s nervous system and other bodily systems due to the over-exposure of mercury. Mercury is a neurotoxin, meaning it affects the nervous system.

Mercury toxicity may occur when a person is exposed to toxic amounts of mercury due to:
 Breathing airborne mercury vapors
 Eating food (usually fish or shellfish) contaminated with methyl mercury.
 Drinking water contaminated with mercury (a relatively rare cause of poisoning)
 Release of mercury from dental work and medical treatments

Heavy metal toxicity from drinking contaminated water:
Arsenic has been found in tap water in levels substantially exceeding the EPA safe limit in several areas of the country.

Toxicity from eating contaminated fish: This is one of the main sources of mercury poisoning and one which is attracting a great deal of recent attention.

Mercury Toxicity from dental fillings: Dental amalgams, or “silver fillings” contains about 50% mercury along with silver, tin, copper and zinc. Mercury tends to leach from the amalgam with release of mercury vapor so over time there is a real risk of a toxic load to the body posing a real health risk.

Signs and symptoms:
The nervous system is very sensitive to the effects of mercury. Exposure to mercury can result in:

Symptoms of mercury poisoning in humans:

2. Oral Cavity problems
Inflammation of the mouth, loss of bone around teeth, ulcerated gums and other areas in the mouth, loose teeth, darkening of gums, taste of metal, bleeding of gums.

Causes of mercury poisoning:
Mercury poisoning is caused by sufficient exposure to elemental mercury or mercury compounds.mercury poisoning can be caused by any number of methods of exposure. Amalgam dental fillings are a main cause, other causes are eating fish that have been exposed to mercury in the environment, industrial and work place exposures such as those in the paint industry.

Some other sources of mercury are cosmetics.
Mercury toxicity may occur when a person is exposed to toxic amounts of mercury due to:
 Breathing airborne mercury vapors
 Eating food (usually fish or shellfish) contaminated with methyl mercury
 Drinking water contaminated with mercury (a relatively rare cause of poisoning)
 Release of mercury from dental work and medical treatments.

Mercury has two physical properties of special interest. First, it has very high surface tension. Surface tension is a property of liquids that make them act like they are covered with a skin.

Mercury is not flammable and does not have an odor. Some mercury salts and organic compounds are soluble in water, depending on the chemical species. Mercury is moderately active. It does not react with oxygen in the air very readily. It reacts with some acids when they are hot, but not with most cold acids.

Mercury (chemical symbol Hg) is an amazing element. It is one of the few metals which is liquid at room temperature. It is extremely volatile, meaning it can easily be converted into gaseous form. Because of its unique properties, mercury is used in many different applications including devices such as thermometers, thermostats, fluorescent lights, and switches. It is also used in paints, preservatives, and some pesticides.

Reaction of mercury with acids

Mercury does not react with non-oxidizing acids but does react with concentrated nitric acid, HNO3, or concentrated sulphuric acid, H2SO4, to form mercury(II) compounds together with nitrogen or sulphur oxides.
Mercury dissolves slowly in dilute nitric acid to form mercury(I) nitrate, mercurous nitrate, Hg2(NO3)2.
Reaction of mercury with bases
Mercury does not react with alkalis under normal conditions

In Western countries, the use of mercury in industrial processes has almost disappeared. In modern times, exposure, and therefore toxicity is limited mainly to dentistry; thermometer, barometer and mercury arc equipment manufacture; pigment, fungicide, insecticide and dry cell battery manufacture. Mercury compounds have in the past been used as diuretics, anti-infective, laxatives, eye and skin treatments, but these uses have now been superseded by more appropriate drugs. Mercury compounds were once used extensively in the production of paper.

How the Body Gets Rid of Mercury

Disposal of the body’s burden of mercury is via the urine and faces, although minute amounts are detectable in expired air. Excretion via the liver occurs in bile and reabsorption of some of this mercury does take place. However, the kidney is equipped with an efficient, energy-dependant mechanism for disposing of metals such as mercury.
Kidney tissue contains a thiol-rich protein called metallothionein; exposure to toxic metals triggers the production of this protein which binds tightly to the metal, retaining it in the kidney tissue in a relatively harmless form. As long as the kidney’s capacity for production of metallothionein is not overwhelmed, mercury excretion can eventually balance intake, thereby limiting worsening of symptoms. However, acute high doses of mercury, or an increase in the chronic dose level can readily precipitate renal failure, one of the classic symptoms of mercury poisoning.

Elemental mercury is usually quite harmless if touched or swallowed. It is so thick and slippery that it usually falls off your skin or out of your stomach without being absorbed.
Breathing in elemental mercury will cause symptoms right away (acute) if enough mercury is breathed in. Symptoms will also occur over time (chronic) if little amounts are inhaled every day. If this occurs, symptoms may include:

Unlike elemental mercury, inorganic mercury is usually poisonous when swallowed. Depending on the how much is swallowed, symptoms may include
• Burning in the stomach and throat
• Bloody diarrhea and vomiting

If inorganic mercury enters your blood stream, it can attack the kidneys and brain. Permanent kidney damage and failure may occur. A large overdose may cause massive blood and fluid loss from diarrhea, kidney failure, and death.
Inorganic mercury can found in:

Organic mercury can cause sickness if breathed in, eaten, or placed on the skin for long periods of time. Usually organic mercury causes problems over years or decades, not immediately. In other words, being exposed to small amounts of organic mercury every day for years will likely cause symptoms to appear later. Regardless, a single large exposure can also cause problems.

Long-term exposure will likely cause neurological symptoms, including:

Organic mercury can be found in:

• Thimerosal
• Fumes from burning coal converted into organic mercury by certain organisms
• Fish that have eaten a form of organic mercury called methyl mercury — see article on methyl mercury
Applications:
• For the manufacturing of industrial chemicals or for electrical and electronic applications.
• In thermometers.
• As mercury sphygmomanometers, a blood pressure meter.
• Thimerosal, an organic compound is used as preservative in vaccines and tattoo inks.
• As mercury barometers, diffusion pumps, coulometer, and many more laboratory instruments.
• In mercury arc rectifier, a type of electrical rectifier that converts alternate current into direct current.
• In mercury-vapor lamps and some neon advertising signs and fluorescent lamps.
• Once used as coolant for nuclear reactors, which has been replaced by sodium and also in the amalgamation process of refining gold and silver ores.
• As folk medicine and ceremonial purposes that involves ingestion, injection, or the sprinkling of elemental mercury around the home.
• In mercury switches, mercury cells and chlorine production, electrodes, batteries, and catalysts.
• As herbicides, insecticides, dental amalgams and liquid mirror telescopes.

Many acute health effects are associated with exposure to high levels of elemental mercury vapor. Respiratory symptoms may predominate (cough, sore throat, shortness of breath). Gastrointestinal effects are frequent in the initial set of symptoms (metallic taste, nausea, vomiting, diarrhea, abdominal pain) as are CNS effects such as headache, weakness, and visual disturbances. Children do not always respond to chemicals in the same way that adults do. Different protocols for managing their care may be needed.

Dermal
Dermal reactions associated with dermal contact with liquid elemental mercury or the vapor are rare. Acrodynia (or pink disease) is associated with hypersensitivity to mercury absorbed from vapor inhalation or dermal exposure. Symptoms of acrodynia include abnormal redness of the skin, followed by peeling of skin on the hands, nose, and soles of the feet.

CNS
Acute inhalation of mercury vapor may produce CNS effects such as headache, weakness, and visual disturbances.
Carcinogenicity
The Department of Health and Human Services (DHHS), the International Agency for Research on Cancer (IARC), and the Environmental Protection Agency (EPA) have not had sufficient evidence to classify elemental mercury as a carcinogen or a no carcinogen.

Chronic inhalation of elemental mercury vapor has not been shown to have any effect on spermatozoa in men. An increased incidence of spontaneous abortion among the wives of men chronically exposed to elemental mercury has been reported.

In female workers, menstrual disorders (dysmenorrheal) have been associated with chronic exposure to high concentrations of mercury vapor. At high levels, inhaled elemental mercury is able to cross the placental barrier, but fetotoxic or significant developmental effects have not been well studied in humans. Adverse developmental effects have been observed in animals but not

Chelation Therapy
Chelation therapy involves putting a chemical, or chelating agent, into the bloodstream. The chelating agent combines with mercury to help remove it from the body. Chelating agents may be given by pill or by injection.
For recent ingestion, the doctor may induce vomiting, pump out the stomach (gastric lavage), or give polythiol resins to bind with the mercury.

To help reduce your chances of getting mercury toxicity, take the following steps:
 Avoid using metallic mercury for any purpose
 If you must use metallic mercury, keep it safely stored in a leak-proof container in a secure space (eg, a locking closet)
 Trade in old thermometers or barometers containing mercury for new ones that do not
 Carefully handle and dispose of items containing mercury (eg, thermometers, fluorescent light bulbs)
 Do not vacuum or heat spilled mercury
 Teach children not to play with silver liquids
 Properly dispose of old medications containing mercury
 Keep mercury-containing medications away from children
 Learn about wildlife and fish advisories in your area from your local public health or natural resources department
 Limit fish intake to recommended quantities and avoid fish known to be especially contaminated by methyl mercury
If you spill a small amount of metallic mercury (eg, a broken thermometer):
 Remove children from the area.