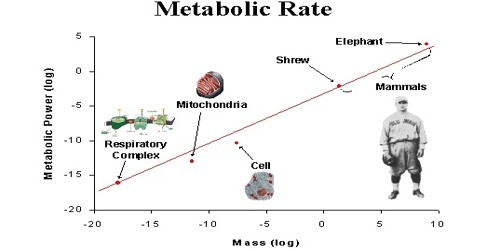 About 70% of a human’s total energy use is due to the basal life processes within the organs of the body (see table). About 20% of one’s energy use comes from physical activity and another 10% from the digestion of food after eating. Even when resting, your body burns calories by performing basic functions to sustain life, such as: breathing, circulation, nutrient processing, cell production, etc.

All of these processes require an intake of oxygen to provide energy for survival, usually from macronutrients like carbohydrates, fats, and proteins. The Krebs cycle produces energy-rich ATP molecules and gives off carbon dioxide.

One popular way to estimate BMR is through the Harris-Benedict formula, which takes into account weight, height, age, and gender.

The researchers calculated that 62.3% of this variation was explained by differences in the mass (weight) minus the fat reserves. Other factors were the amount of fat (6.7%), age (1.7%), and experimental error including within-subject difference (2%). The rest of the variation (26.7%) was unexplained.

So there are differences in BMR even when comparing two subjects with the same lean body mass. The top 5% of people are metabolizing energy 28-32% faster than individuals with the lowest 5% BMR. For instance, one study reported an extreme case where two individuals with the same lean body mass of 43 kg had BMRs of 1075 kcal/day (4.5 MJ) and 1790 kcal/day (7.5 MJ). This difference of 715 kcal (67%) is equivalent to one of the individuals completing a 10-kilometer run every day.

Metabolic rates vary according to animal size, and this has been discussed for over a century.

The graphs show that :