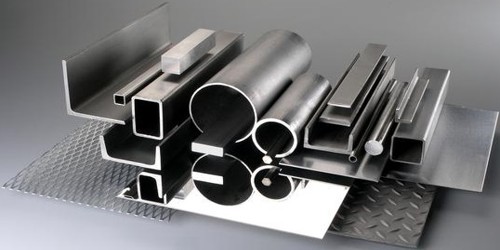 Some chemical elements are called metals. It is a class of substances characterized by high electrical and thermal conductivity as well as by malleability, ductility, and high reflectivity of light. They are the majority of elements in the periodic table. They are usually crystalline solids. These elements usually have the following properties:

Metals differ widely in their chemical reactivity. Most metals are solid at room temperature, but this does not have to be the case. Mercury is liquid. Alloys are mixtures, where at least one part of the mixture is a metal. The most reactive include lithium, potassium, and radium, whereas those of low reactivity are gold, silver, palladium, and platinum. Examples of metals are aluminum, copper, iron, tin, gold, lead, silver, titanium, uranium, and zinc. Well-known alloys include bronze and steel.

The study of metals is called metallurgy.

Metals are very useful to people. They are used to make tools because they can be strong and easy to shape. Iron and steel have been used to make bridges, buildings, or ships.

Some metals are used to make items like coins because they are hard and will not wear away quickly. Some metals, like steel, can be made sharp and stay sharp, so they can be used to make knives, axes or razors.

Rare metals with high value, like gold, silver, and platinum are often used to make jewelry. Metals are also used to make fasteners and screws. Pots used for cooking can be made from copper, aluminum, steel or iron.

Many things that are made of metals may, in fact, be made of mixtures of at least one metal with either other metals or with non-metals. These mixtures are called alloys. Some common alloys are:

Steel (iron and carbon) (Carbon is a non-metal)

People first began making things from metal over 9000 years ago, when they discovered how to get copper from its ore. They then learned how to make a harder alloy, bronze, by adding tin to the copper. About 3000 years ago, they discovered iron. By adding small amounts of carbon to iron, they found that they could make a particularly useful alloy – steel.

In chemistry, metal is a word for a group of chemical elements that have certain properties. It is an element that readily forms positive ions (cations) and has metallic bonds. It is easy for the atoms of a metal to lose an electron and become positive ions, or cations. In this way, metals are not like the other two kinds of elements – the nonmetals and the metalloids.  Most elements on the periodic table are metals.

However, some metals are different. An example is the metal sodium. It is soft, melts at a low temperature, and is so light, it floats on water. People should not try this though, because another property of sodium is that it explodes when it touches water.

Compounds, which have metal atoms combined with other atoms to make molecules, are probably the most common substances on Earth. For example, common salt is a compound of sodium.