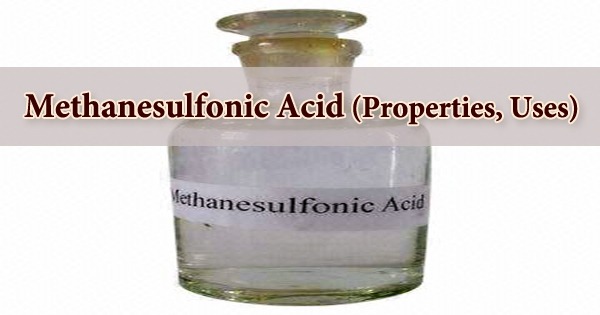 Depending on whether the ambient temperature is greater or less than 20 ºC, methanesulfonic acid is a hygroscopic colorless liquid or white solid. Water and oxygenated solvents are very soluble, but most hydrocarbons are only slightly soluble. It is a heavy acid in aqueous solution. It’s a one-carbon compound that’s an alkanesulfonic acid. It’s a methanesulfonate conjugate acid that’s hygroscopic in its condensed form.

Methanesulfonic acid can be thought of as a bridge between sulfuric acid (H2SO4) and methylsulfonylmethane ((CH3)2SO2), with each step effectively replacing a –OH group with a –CH3. At low temperatures, it appears as a colorless or slightly brown oily liquid that solidifies. It has a melting point of 20 ºC, a boiling point of 167 degrees Celsius (13.33 kPa), a temperature of 122 degrees Celsius (0.133 kPa), a relative density of 1.4812 (18 ℃), and a refractive index of 1.4317 (16 ℃). Water, alcohol, and ether are soluble, but alkanes, benzene, and toluene are insoluble.

It will not decompose when exposed to boiling water or a hot alkaline solution. It also has a high corrosion resistance to metals like iron, copper, and lead. Because of its acidity and solubility, MSA is useful as a catalyst in organic reactions, especially polymerization. Its benefit over concentrated sulfuric acid in many applications is that it has equal acid strength but is not an oxidant. Hazardous decomposition products generated during a fire: Carbon oxides, Sulfur oxides.

Methanesulfonic acid has the ability to dissolve a wide variety of metal salts, many of them at much higher concentrations than hydrochloric or sulfuric acid. It’s usually made by oxidizing methylthiol or dimethyl disulfide with nitric acid, hydrogen peroxide, chlorine, or electrochemical processes. The nitrate oxidation of thiocyanate methyl yields this compound. With fractional addition of methyl thiocyanate, nitric acid and negative water are carefully heated to 80-88 °C, and the temperature is automatically raised to about 105 °C. To obtain a crude product, the reaction was heated to 120° C and reacted for 5 hours after it became mild.

The crude product was mixed with exchanged water and purified after being modified to pH 8-9 with a 25% barium hydroxide solution. Until crystalline precipitation, the filtrate is condensed. To make barium methanesulfonate, the crystal is washed in methanol to extract the nitrate. It is then brought to a boil in exchanged water, then added sulfuric acid for decomposition while it is still hot, filtered, and the filtrate concentrated under vacuum to obtain the finished product. By reacting methanesulfonic acid with NaBH4 in an aprotic solvent such as THF or DMS, a complex of BH3 and the solvent is produced, which can be used to make borane (BH3).

Since it is a non-volatile, solid acid that is soluble in organic solvents, methanesulfonic acid is used as an acid catalyst in organic reactions. It’s a source of medicine and pesticides. It can also be used as a dehydrating agent, coating curing accelerator, fiber treating agent, solvent, catalysis, esterification, and polymerization reaction catalyst. It’s used in medicine and the electroplating industry as a solvent, alkylation catalyst, and esterification and polymerization catalyst. It may also be used to prevent oxidation.

For electroplating tin and tin-lead solders, methanesulfonic acid solutions are used. Fluoroboric acid, which releases corrosive and volatile hydrogen fluoride, is being phased out. Since several metal salts are soluble in aqueous solutions, this acid is used in ion-exchange resin regeneration. It was created to replace sulfuric acid as an esterification catalyst in the synthesis of resins in paints and coatings. Methanesulfonic acid has a number of benefits over sulfuric acid, one of which is that it is not an oxidizing species.