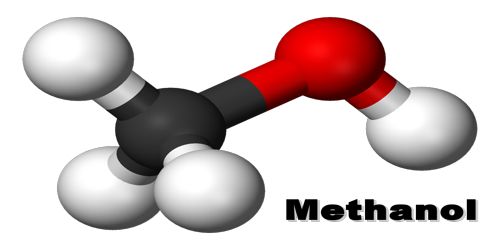 Methanol is a colorless, toxic, flammable liquid used as a general solvent, antifreeze, and fuel. It is also called methyl alcohol, wood alcohol. Its ahemical formula: CH4O. It is the simplest alcohol, being only a methyl group linked to a hydroxyl group. It is a light, volatile, colorless, flammable liquid with a distinctive odor very similar to that of ethanol (drinking alcohol). It is highly flammable and poisonous type of alcohol which, when ingested even in quantities as small as 10 milliliter (two tea-spoonsful), can cause permanent blindness, and 100 milliliter may be fatal. Made by catalytic oxidation of methane (from natural gas), methanol can be used as an alternative fuel or as a gasoline additive.

Methanol is also found in abundant quantities in star-forming regions of space, and is used in astronomy as a marker for such regions. It is detected through its spectral emission lines.

Production and Properties of Methanol

The production of methanol usually consists of three basic steps independent of feedstock material: synthesis gas preparation, methanol synthesis and methanol purification. Carbon monoxide and hydrogen react over a catalyst to produce methanol. Today, the most widely used catalyst is a mixture of copper and zinc oxides, supported on alumina, as first used by ICI in 1966. At 5–10 MPa (50–100 atm) and 250 °C (482 °F), the reaction is characterized by high selectivity (>99.8%): Methanol is methane with one hydrogen molecule replaced by a hydroxyl radical (OH).  It is a chemical compound with chemical formula CH3OH (often abbreviated MeOH). It is the simplest alcohol, and is a light, volatile, colourless, flammable, poisonous liquid with a distinctive odor that is somewhat milder and sweeter than ethanol (ethyl alcohol).

It is responsible for accidental, suicidal, and epidemic poisonings, resulting in death or permanent sequelae. Toxicity is due to the metabolic products of alcohol dehydrogenase (ADH) and aldehyde dehydrogenase. The rapid and accurate diagnosis of toxic alcohol poisoning due to methanol (methyl alcohol) is paramount in preventing serious adverse outcomes. The quantitative measurement of specific serum levels of methanol using gas chromatography is expensive, time consuming and generally only available at major tertiary-care facilities.

Methanol is frequently used as a denaturant additive for ethanol manufactured for industrial uses this addition of a poison economically exempts industrial ethanol from the rather significant ‘liquor’ taxes that would otherwise be levied as it is the essence of all potable alcoholic beverages. Methanol is often called wood alcohol because it was once produced chiefly as a byproduct of the destructive distillation of wood. It is now produced synthetically by a multi-step process: natural gas and steam are reformed in a furnace to produce hydrogen and carbon monoxide; then, hydrogen and carbon monoxide gases react under pressure in the presence of a catalyst. Methanol is a traditional denaturant for ethanol, thus giving the term methylated spirit.Methanol is also used as a solvent, and as an antifreeze in pipelines and windshield washer fluid.In some wastewater treatment plants, a small amount of methanol is added to wastewater to provide a food source of carbon for the denitrifying bacteria, which convert nitrates to nitrogen. It is also used as a denaturing agent in polyacrylamide gel electrophoresis.