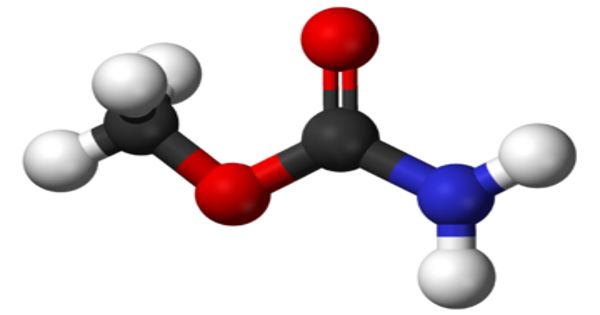 Methyl carbamate is a carbamate ester. It also called methylurethane, or urethylane is an organic compound and the simplest ester of carbamic acid (H2NCO2H). It appears as white crystals. It is a colorless solid.

Methyl carbamate is a carbamate ester resulting from the formal condensation of the carboxy group of carbamic acid with methanol. Itis prepared by the reaction of methanol and urea:

It also forms in the reaction of ammonia with methyl chloroformate or dimethyl carbonate. It is a carbamate ester resulting from the formal condensation of the carboxy group of carbamic acid with methanol.

Carbamates are chemically similar to, but more reactive than amides. Unlike its close relative ethyl carbamate it is not mutagenic in Salmonella (it tested negative in the Ames test), but it is mutagenic in Drosophila. Experimental evidence does show that it is a carcinogen in rats, and not carcinogenic in mice. The compound is “known to the state of California to cause cancer” per Proposition 65. Flash point data for Methyl carbamate are not available; however, Methyl carbamate is probably combustible.

Production, use, and exposure

The compound was detected in wines preserved with dimethyl dicarbonate. They are reduced chemoselectively to the corresponding amines, in the presence of ketones, nitriles or halogens, by treatment with sodium hydrogen telluride in DMF.

Methyl carbamate is used primarily in the textile and polymer industries as a reactive intermediate. It was used in the synthesis of protected aminocyclopropanes. In the textile industry, it is used in the manufacture of dimethylol methyl carbamate-based resins that are applied on polyester cotton blend fabrics as durable-press finishes. Fabric is given wrinkle-resistance and durable-press properties with no release of formaldehyde from the agent or from the treated fabric. The treated fabrics have good crease-angle retention, resist acid souring in commercial laundries, do not retain chlorine, and have flame-retardant properties. Methyl carbamate also is used in the manufacture of pharmaceuticals, insecticides, and urethane.

N-Methyl carbamates are widely used as insecticides. They have anticholinesterase activity without a cumulative effect.