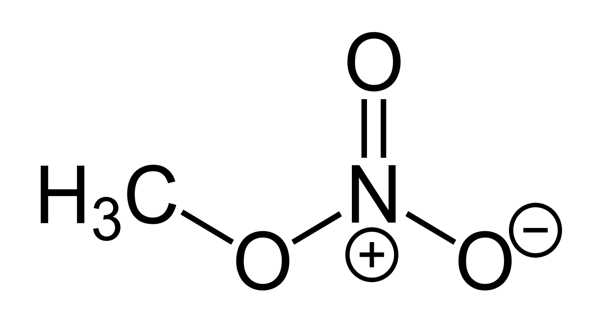 Methyl nitrate, with the chemical formula CH3NO3, is the methyl ester of nitric acid. It is a colorless, volatile, explosive liquid. It takes the form of a liquid or a gas. At 10.4°F, it boils. It is used to propel rockets.

Methyl nitrite is a heat-sensitive explosive and an oxidizing agent; its sensitivity increases in the presence of metal oxides. It forms explosive salts when combined with inorganic bases. It reacts explosively with air. It detonates with greater force than ethyl nitrite. Even when stored in a refrigerator, lower alkyl nitrites can decompose and burst the container.

It can be produced by the condensation of nitric acid and methanol:

On a laboratory or industrial scale, methyl nitrate can be produced by distilling a mixture of methanol and nitric acid or nitrating methanol with a mixture of sulfuric and nitric acids. The first procedure is not recommended due to the high explosion risk posed by methyl nitrate vapor. The second procedure is nearly identical to that of nitroglycerin production. However, the process is usually carried out at a slightly higher temperature, and the mixture is mechanically stirred on an industrial scale rather than with compressed air.

Methyl nitrate is a highly reactive explosive. When ignited, it produces a gray-blue flame that burns extremely hot. Methyl nitrate, like nitroglycerin, ethylene glycol dinitrate, and other nitrate esters, is a very strong explosive. The sensitivity of methyl nitrate to detonation is among the highest known, with even a number one blasting cap, the lowest power available, producing a nearly complete detonation of the explosive.

Despite its superior explosive properties, methyl nitrate has not been used as an explosive due to its high volatility, which prevents it from being safely stored or handled.

Methyl nitrate is used as a precursor and intermediate in chemical syntheses, such as during the production of phenylpropanolamine.

Methyl nitrate is toxic and causes headaches when inhaled, in addition to being explosive. It is moderately toxic when inhaled. High concentrations of narcotic.