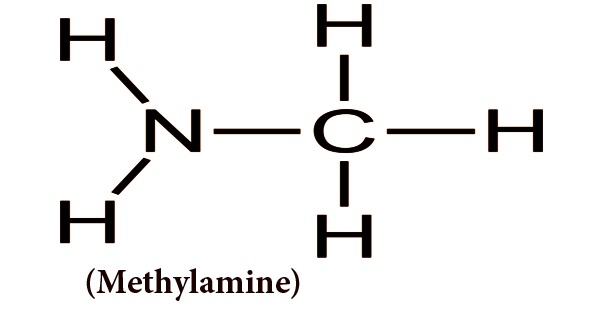 Often known as aminomethane, methylamine is an organic compound with a CH3NH2 formula. It is an essential type of raw and intermediate organic chemical material and is a flammable, colorless gas at normal temperature and pressure. It has a heavy scent of ammonia after being liquefied or compressed at high concentrations. At very low amounts, it has a fishy odor. It is readily soluble in water and is soluble in ether and alcohol. Anhydrous methylamine appears as a colorless gas or a liquid. A strong fishy odor that resembles an ammonia odor. Therefore, the liquid boils at 20.3°F and vaporizes easily when unconfined. In low-lying areas, vapors are heavier than air and can accumulate. Easily ignited in most circumstances. With the explosive maximum being 4.3% to 21%, it is flammable and can form explosive mixtures with air.

The simplest of the methylamines, consisting of ammonia bearing a single methyl substituent, is methylamine. It is sold in methanol, ethanol, tetrahydrofuran, or water as a solution, or in pressurized metal containers as an anhydrous gas. The containers can violently rupture and rocket under prolonged exposure to intense heat. Used in the manufacture of pharmaceuticals, insecticides, paint removers, surfactants, chemicals from rubber. With the alkaline being higher than ammonia, methylamine has poor alkalinity. It can interact to form water-soluble salts with an inorganic acid. It is obtained by the high pressure and elevated temperature reaction between methanol and ammonia in the catalyst action. 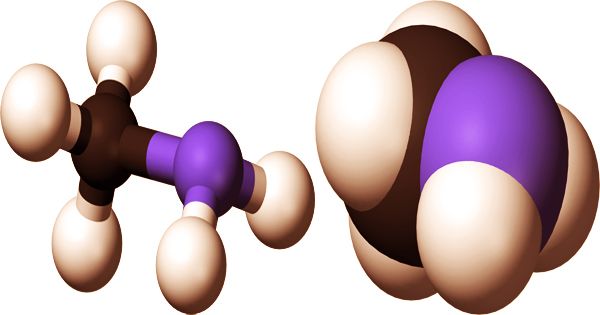 Ball and stick model, and space fill model of methylamine

Industrially, methylamine is transported in pressurized railcars and tank trailers in its anhydrous form; it has a heavy, fish-like odor. Alternatively, when heated to 300 °C in the presence of zinc chloride, it can be obtained via the reaction between formaldehyde and ammonium chloride. Pesticides, pharmaceuticals, rubber vulcanization accelerators, dyes, explosives, leather, petroleum, surfactants, and ion exchange resins, paint strippers, and coatings, as well as additives, can be made with methylamine.

Methylamine is an important raw material for the manufacture of dimethoate, carbaryl, and chlordimeform pesticides. The inhalation toxicity of methylamine is under the category of low toxicity. 5mg/m3 is the highest permissible air concentration (0.4ppm). Charles-Adolphe Wurtz first prepared it in 1849 through the hydrolysis of methyl isocyanate and related compounds. The use of the Hofmann rearrangement to yield methylamine from acetamide and bromine gas is an example of this process. It is corrosive and can cause eye, skin, and mucous membrane irritation. In the case of fire, high heating temperatures, damage to cylinders and accessories that can cause an explosion can cause a risk of fire.

Methylamine odor is mild but easily detectable at less than 10 ppm, heavy at 20 to 100 ppm, and intolerably ammoniacal at 100 to 500 ppm. Methylamine hydrochloride is readily prepared by numerous other methods in the laboratory. One procedure involves treating ammonium chloride with formaldehyde.

Liquid methylamine has a powerful corrosion and irritation effect and can cause chemical burning of the eyes and skin. The patients can get burning eyes, photophobia, lacrimation, conjunctival hyperemia, eyelid inflammation, corneal edema, and superficial ulcers if 40 percent aqueous methylamine is splashed into the eyes, with those symptoms being able to last 1 to 2 weeks. Long-term exposure to low methylamine concentrations can lead to eye, nose, and throat dryness and discomfort. Spontaneous decarboxylation of glycine with a strong base in water is another form of methylamine processing.

Methylamine may be transformed to formaldehyde and hydrogen peroxide by semicarbazide-sensitive amine oxidase (SSAO), which has been shown to be harmful to culture endothelial cells. The pharmaceuticals ephedrine and theophylline, the pesticides carbofuran, carbaryl, and metham sodium, and the solvents N-methylformamide and N-methylpyrrolidone are representative of commercially important chemicals derived from methylamine. As a building block, the preparation of certain surfactants and photographic developers includes methylamine.

In dyeing and tanning, methylamine is used as a fuel additive and as a rocket propellant in the photographic developer. It is also used as a polymerization inhibitor and in organic synthesis. In some species, such as Mentha aquatica, this happens. Chronic methylamine administration raises the amount of blood prorenin, which strongly indicates that unregulated methylamine deamination could be a risk factor for endothelial injury initiation and subsequent atherosclerosis genesis. In order to make methamphetamine in the AMC series Breaking Bad, fictional characters Walter White and Jesse Pinkman use methylamine. As an alternative to conventional methamphetamine processing methods involving pseudoephedrine, a cold drug, its use becomes key to the plotline.