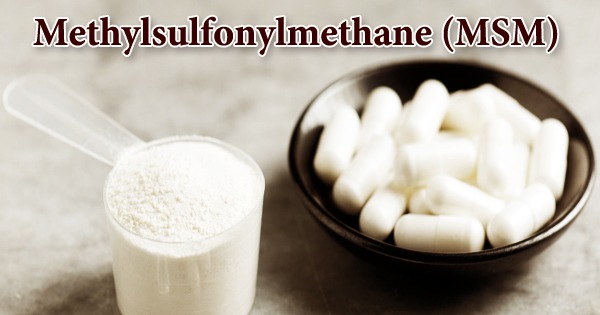 Methylsulfonylmethane (MSM) is a sulfur-containing organic compound found in a wide range of fruits, plants, grains, and animals, including humans. It has the formula (CH3)2SO2 and is an organosulfur compound. It’s also known as methyl sulfone and dimethyl sulfone (DMSO2), among other titles. MSM is a 34-percent elemental sulfur crystalline solid that is white, odorless, and slightly bitter in taste. MSM is a natural oxidative metabolite form of dimethyl sulfoxide (DMSO).

MSM is a common component of the earth’s natural sulfur cycle, which takes sulfate from rock minerals and transports it to oceans and other bodies of water, where microorganisms transform it to DMS, which is then aerosolized. The sulfonyl functional group is present in this colorless solid, which is chemically inert. It can be found naturally in some primitive plants, in limited quantities in many foods and drinks, and as a dietary supplement.

MSM is found of the highest concentration in cow’s milk, which contains approximately 3.3 parts per million (ppm). Coffee (1.6 ppm), tomatoes (trace to 0.86 ppm), tea (0.3 ppm), Swiss chard (0.05-0.18 ppm), beer (0.18 ppm), corn (up to 0.11 ppm), and alfalfa (0.07 ppm) are some of the other foods that contain MSM. MSM is also used as a cutting agent in the production of illegal methamphetamine. It’s also common in the atmosphere above marine areas, where the airborne bacteria Afipia uses it as a carbon source. Under laboratory and metabolic conditions, oxidation of dimethyl sulfoxide releases the sulfone.

Ozone, UV irradiation, nitrate, or a hydroxyl radical will oxidize atmospheric DMS to DMSO, which can then be further oxidized to MSM. Both DMSO and MSM concentrations in the atmosphere are cyclical, with the highest levels in the spring and summer and the lowest levels in the fall and winter. MSM has been used as a high-temperature solvent in industry due to its polarity and thermal stability. In molten MSM, for example, potassium fluoride has been used to displace aryl chlorides.

Plants like Equisetum arvense, also known as horsetail, have been used to isolate MSM. Dimethyl Sulfone can help the body generate more insulin while also promoting carbohydrate metabolism. It is needed for the production of human collagen. It is known as “naturally beautiful carbon material” because it not only promotes wound healing but also helps with metabolic and neurological health requirements of vitamin B and vitamin C, as well as biotin synthesis and activation. MSM can be deprotonated with sodium amide because it has a pKa of 31. As a nucleophile, the conjugate base was used.

MSM for supplemental use is oxidized from the commercial solvent DMSO rather than being separated from plant sources due to its low concentration. Bergstrom Nutrition’s OptiMSM, for example, is made by oxidizing DMSO with hydrogen peroxide and then purifying it with several distillation measures. This makes MSM production more feasible while also reducing organic waste production. Oral doses of MSM are absorbed into the blood and cross the blood-brain barrier, according to nuclear magnetic resonance (NMR) reports. MSM was also observed in detectable amounts in the blood and cerebrospinal fluid in an NMR sample, implying that it comes from food sources, intestinal bacterial metabolism, and the body’s endogenous methanethiol metabolism.

Human skin, hair, nails, bones, muscles, and various organs all contain dimethyl sulfone. People who are deficient in it will develop health problems or diseases. It is the most important material for people to keep their biological sulfur balance. It serves as a rehabilitation and healthcare tool for people. It is a necessary medication for human survival and wellbeing. Dimethyl sulfoxide, an MSM metabolite, occurs naturally in the human body. MSM is thought to be beneficial in the treatment of OA because sulfur is needed for the formation of connective tissue.

MSM has been shown in animal studies to help reduce inflammatory joint disease, but there have been no reported human trials. Sulfur has no known Dietary Reference Intake (DRI) or Daily Value, but it is found in cruciferous vegetables, garlic, onions, asafoetida, legumes, nuts, seeds, plant milk, animal milk, and eggs (whites and yolks). MSM has anti-inflammatory effects and is used both orally and topically for a number of pain etiologies.

The oxidation of methyl sulfone with nitric acid produces dimethyl sulfone. Nitric oxide oxidized methyl sulfone at 140-145 °C. The reaction was cooled and filtered after it was done, yielding white needles crude. The finished goods are collected after vacuum distillation at 138-145 °C (98.42kPa) distillate materials. Furthermore, the role of MSM as an active agent versus its role in promoting skin permeation (in a manner similar to its solvent relative DMSO) must be characterized/controlled in cases involving topical therapeutics. Supplemental methylsulfonylmethane’s biochemical effects are poorly known.

MSM has been shown to be effective in reducing osteoarthritic pain when used topically and orally. It has been shown to greatly reduce osteoarthritis symptoms such as pain and swelling, but not stiffness. MSM has been shown in many human and animal studies to alleviate oxidative stress and inflammation. MSM has been shown in a small human trial to protect muscles from injury by reducing the amount of oxidative stress damage caused by exercise. The overall antioxidant potential was substantially increased after taking MSM in a second small trial. MSM is a high-temperature solvent for a variety of inorganic and organic compounds, as well as an antiinflammatory, antiproliferative, and antiparasitic agent.