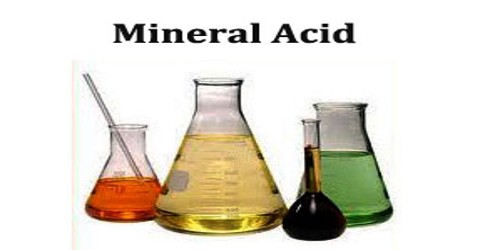 Mineral acid also known as inorganic acid, which is an acid derived from one or more inorganic compounds. It is a substance that yields hydrogen ions in solution and from which hydrogen may be displaced by a metal to form a salt. Different acids have different formulae. For e.g., the formula for sulfuric acid is H2SO4; the formula for nitric acid is HNO3. But one common thing in all acids is that they always have at least one hydrogen atom in their molecule. All acids react with bases to form salts and water (neutralization). Other properties of acids include a sour taste and the ability to cause certain dyes to undergo a color change. A common example of this is the ability of acids to change litmus paper from blue to red. Functions and Effects of Mineral Acids

The Effect of the continued ingestion of mineral acid on growth of body and bone and on the composition of bone and of the soft tissue. The Preparation of d-galacturonic acid from Lemon Pectic acid.

Vegetable and Mineral acids in the treatment, prevention and remedial of Cholera an other epidemic disorders of the bowels.

Simulation by Mineral and Fatty Acids in the barnacle Balanus balanoides.

Ensiling of Sugar Cane with Ammonia Molasses and Mineral acids. Mineral acids are used in many sectors of the chemical industry as feedstocks for the synthesis of other chemicals, both organic and inorganic. Large quantities of these acids – especially sulfuric acid, nitric acid, and hydrochloric acid – are manufactured for commercial use in large plants.

Mineral acids are also used directly for their corrosive properties. For example, a dilute solution of hydrochloric acid is used for removing the deposits from the inside of boilers, with precautions taken to prevent the corrosion of the boiler by the acid. This process is known as descaling.