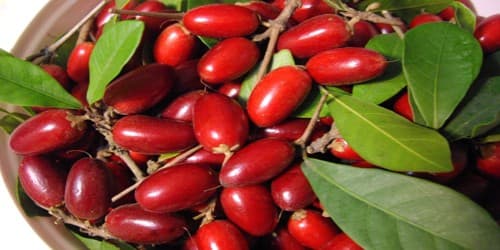 The miracle fruit is the berry of Synsepalum dulcificum, a plant from West Africa. The chemical produced by the fruit makes other foods taste sweet. This chemical is called miraculin. The secret to the fruit’s taste-transforming powers is a protein called miraculin. When you eat the fruit and allow the pulp to coat the inside of your mouth, it masks the real taste of bitter foods for a few minutes to several hours, depending on how much fruit you eat. Miraculin is a glycoprotein molecule, with some trailing carbohydrate chains. It is an evergreen shrub of the family Sapotaceae, grown for its mild fruits that make subsequently eaten sour foods taste sweet. The berry of the miracle fruit plant and the oil from its seeds are used as medicine.  It was discovered in 1725 by Chevalier des Marchais, a French cartographer commissioned by King Louis XV to travel and document the west coast of Africa. 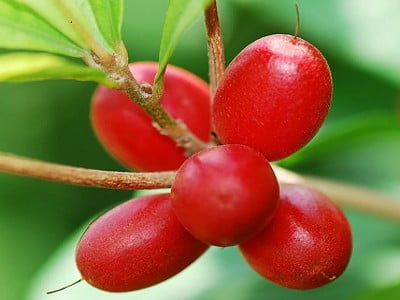 The miracle fruit plant grows as a dense shrub or small tree, usually not more than 5.5 meters (18 feet) in height in the wild and generally smaller when cultivated. It contains the glycoprotein miraculin, which binds to the sweet receptor cells on tastebuds, making acidic, sour or bitter foods taste sweet. The berry has a low sugar content and a mildly sweet taste. The berries have the ability to make sour foods taste deliciously sweet. When the fruit is eaten, miraculin binds to the tongue’s taste buds, causing sour foods to taste sweet. Plants typically begin producing fruit after three or four years and require acidic soil. At neutral pH, miraculin binds and blocks the receptors, but at low pH (after eating sour food) miraculin binds protons and activates the sweet receptors. This is what causes the sweet taste. This effect lasts until the protein is washed away by saliva (up to about 60 minutes).

People use miracle fruit for diabetes, hand movement, chemotherapy-related taste disturbances, and other conditions, but there is no good scientific evidence to support these uses.