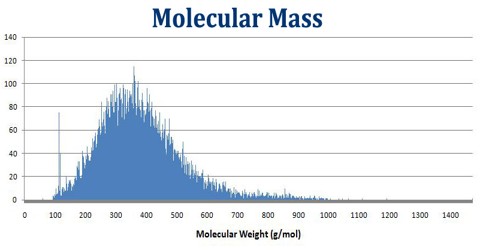 Molecular Mass is the amount of mass associated with a molecule. It is also called as molecular weight. It can be calculated by adding the mass of each atom multiplied by the number of atoms of the element present in the molecule. The molecular mass gives the mass of a molecule relative to that of the 12C atom, which is taken to have a mass of 12. Molecular mass is a dimensionless quantity, but it is given the unit Dalton or atomic mass unit as a means of indicating the mass is relative to 1/12th the mass of a single atom of carbon-12. The molecular mass or weight of molecules can be determined by following methods: For example, to find the molecular mass of methane, CH4, the first step is to look up the atomic masses of carbon C and hydrogen H using a periodic table:

Because there is no subscript following the C, we know there is only one carbon atom present in methane. The subscript 4 following the H means there are four atoms of hydrogen in the compound.

So, adding up the atomic masses, we get:

Note the number of significant digits in the final value.