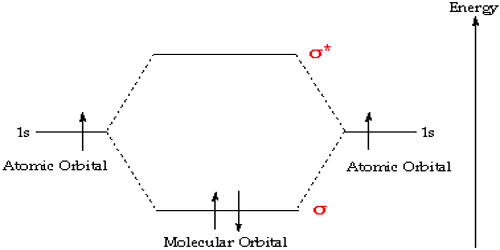 Molecular orbital (MO) theory describes the behavior of electrons in a molecule in terms of combinations of the atomic wavefunctions. In chemistry, Molecular orbital (MO) theory is a method for describing the electronic structure of molecules using quantum mechanics. This theory describes the distribution of electrons in molecules in much the same way that the distribution of electrons in atoms is described using atomic orbitals. Electrons are not assigned to individual bonds between atoms but are treated as moving under the influence of the nuclei in the whole molecule. The spatial and energetic properties of electrons are described by quantum mechanics as molecular orbitals surround two or more atoms in a molecule and contain valence electrons between atoms. Chemical bonding occurs when the net attractive forces between an electron and two nuclei exceed the electrostatic repulsion between the two nuclei.

Molecular orbital theory (MO theory) provides an explanation of chemical bonding that accounts for the paramagnetism of the oxygen molecule. MO theory uses the combination of atomic orbitals to yield molecular orbitals that are delocalized over the entire molecule rather than being localized on its constituent atoms. MO theory also helps us understand why some substances are electrical conductors, others are semiconductors, and still, others are insulators.

The Rules of Molecular Orbital Theory:

Molecular orbital theory, which was proposed in the early 20th century, revolutionized the study of bonding by approximating the states of bonded electrons—the molecular orbitals—as linear combinations of atomic orbitals (LCAO). MO theory describes chemical bonding as the linear combination of the atomic orbitals (LCAO) of each atom in a given compound. These approximations are now made by applying the density functional theory (DFT) or Hartree–Fock (HF) models to the Schrödinger equation. This Theory is primarily used to explain the bonding in molecules that cannot be explained by Valence Bond Theory. These are molecules that generally involve some form of resonance.

In MO theory, molecular orbitals formed by the overlap of atomic orbitals. Atomic orbital energy correlates with electronegativity, as electronegative atoms hold electrons more tightly, lowering their energies. The other foundational theory of quantum chemistry is the valence bond theory.