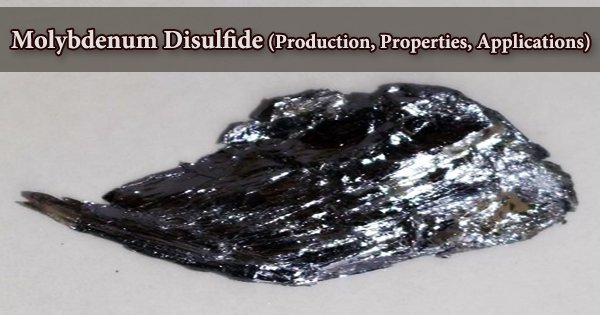 Molybdenum disulfide (or moly) is a naturally occurring inorganic chemical found in the mineral molybdenite. It is made up of molybdenum and sulfur and has the chemical formula MoS2. It is the most well-known of the transition metal dichalcogenide (TMD) family’s single layers. Because of its low coefficient of friction and great chemical and thermal durability, MoS2 has been utilized in bulk as a solid-state lubricant for many years. A transition metal dichalcogenide is a name given to the compound. It’s a silvery black solid found in the mineral molybdenite, which is the primary source of molybdenum.

MoS2 is a moderately inert material with a hexagonal layered structure comparable to graphite in its crystals. It is unaffected by dilute acids or oxygen, and because of its low friction and resilience, it is commonly employed as a dry lubricant. MoS2 has a layered structure with a plane of molybdenum atoms sandwiched by planes of sulfide ions in all forms. These three layers combine to produce a MoS2 monolayer. Stacks of monolayers are kept together by weak van der Waals interactions in bulk MoS2.

Molybdenum disulfide (MoS2) has a hexagonal plane of S atoms on either side of a hexagonal plane of Mo atoms in its crystal structure. With strong covalent connections between the Mo and S atoms but weak van der Waals forces keeping layers together, these triple planes stack on top of each other. This enables them to be mechanically separated to produce MoS2 sheets in two dimensions. MoS2 is found in nature as either a crystalline mineral called molybdenite or as a rare low-temperature variant of molybdenite called jordisite.

The preparation of MoS2 was done using a modified version of a technique published in the literature. All of the chemicals were purchased and utilized exactly as they were given to us. Flotation is used to purify molybdenite ore, resulting in reasonably pure MoS2. Carbon is the most significant pollutant. MoS2 may also be generated through metathesis processes from molybdenum pentachloride by heating practically all molybdenum compounds with hydrogen sulfide or elemental sulfur. MoS2 has a high melting point, like other mineral salts, yet it begins to sublime at a comparatively low temperature of 450oC. This characteristic is beneficial in the purification of the chemical.

In nature, crystalline MoS2 exists in two forms: 2H-MoS2 and 3R-MoS2, with the “H” and “R” indicating hexagonal and rhombohedral symmetry, respectively. Each molybdenum atom is covalently linked to six sulfide ions at the core of a trigonal prismatic coordination sphere in each of these configurations. Bulk MoS2 is a semiconductor with an indirect bandgap of ~1.2eV, thus the optoelectronics sector isn’t very interested in it. By intercalating 2H-MoS2 with alkali metals, a third metastable crystalline phase known as 1T-MoS2 was found. This metallic phase has tetragonal symmetry.

When compared to the bulk, individual layers of MoS2 exhibit drastically different characteristics. Hexagonal MoS2, like graphite, is a good “dry” lubricant due to its layered structure. It and its relative tungsten disulfide can be employed as surface coatings on machine components (for example, in the aerospace sector), two-stroke engines (the type used for motorcycles), and gun barrels (to reduce friction between the bullet and the barrel). MoS2 molecules that resemble nanotubes and buckyballs have been discovered. The most prevalent natural form of molybdenum is molybdenum disulfide, or MoS2, which is collected from the ore and refined for use in lubrication.

Because molybdenum disulfide is derived from geothermal sources, it is resistant to heat and pressure. This is especially true if there are modest quantities of the sulfur present to react with iron and form a sulfide layer that is compatible with MoS2 in terms of lubrication. Monolayer MoS2 possesses a direct bandgap, but bulk MoS2 in the 2H phase is known to be an indirect-band gap semiconductor. Because of MoS2‘s layer-dependent optoelectronic characteristics, there has been a lot of interest in 2-dimensional MoS2-based devices.

Unlike graphite, MoS2‘s lubricating characteristics are not dependent on adsorbed water or other vapors. It can withstand temperatures of up to 1100°C in nonoxidizing conditions and 350°C in oxidizing situations. Exfoliation in the liquid phase may also be utilized to produce monolayer to multilayer MoS2 in solution. Lithium intercalation to delaminate the layers and sonication in a high-surface tension solvent are two techniques. Thin-film FETs have been shown to preserve their electrical characteristics when bent to a radius of curvature of 0.75mm using MoS2 monolayers, which are flexible. They’re stiffer than steel and have a greater breaking strength than flexible polymers like polyimide (PI) and polydimethylsiloxane (PDMS), making them ideal for flexible electronics.

By doping MoS2 with chromium, the wear resistance of MoS2 in lubricating applications may be improved. Because of its stability, it may be used in high-temperature situations where oils and greases aren’t suitable. In order to understand the process of delamination in few-layer to multi-layer flakes, the widely used method of micromechanical exfoliation has been intensively investigated in MoS2. In the presence of air, molybdenum disulfide is stable and is only damaged by aggressive reagents. When heated, it interacts with oxygen to create molybdenum trioxide:

One of the most commonly utilized lubricants in space systems is molybdenum disulfide (MoS2). It’s a popular ingredient that helps wheel bearing oil resist seizing. Intercalation compounds are formed in the presence of molybdenum disulfide. Its usage as a cathode material in batteries necessitates this characteristic. Because of its unique friction-reducing characteristics connected to its crystalline structure, it has been utilized as a solid lubricant for many years. MoS2 is a semiconductor in addition to having lubricating characteristics. It’s also known that when doped with an electric field, it and other semiconducting transition-metal chalcogenides become superconductors at their surfaces.

Monolayer MoS2 has an order of magnitude higher visible optical absorption than silicon, making it a potential solar cell material. A molybdenum atom and a sulfur atom are separated by 0.241 nanometers, but two sulfur atoms from two neighboring layers are separated by 0.349 nanometers. This property was frequently utilized to explain MoS2‘s lubricating qualities and its ease of cleavage between layers. MoS2 is effective at hydrogenating nitro compounds to amines and can be used to reductively alkylate secondary amines. Organosulfur compounds, aldehydes, ketones, phenols, and carboxylic acids may all be hydrogenolyzed to their corresponding alkanes using the catalyst.