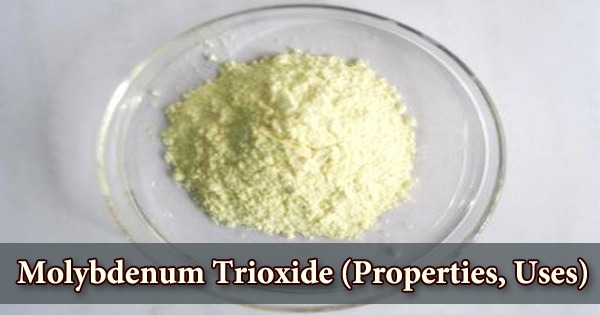 Molybdenum trioxide is a component of ceramics, enamels, and pigments, as well as a catalyst in the petroleum industry. The exact mechanism of molybdenum toxicity is yet unknown. The development of a copper-tetrathiomolybdate complex in the gastrointestinal tract’s reducing media, which decreases copper’s biological usefulness, is thought to be the major cause. Three oxygen atoms are doubly linked to the center molybdenum atom in the gas phase. Anhydrous MoO3 is made up of layers of deformed MoO6 octahedra in an orthorhombic crystal in its solid-state.

The octahedra create chains that are cross-linked by oxygen atoms to form layers. One short molybdenum-oxygen link to non-bridging oxygen exists in the octahedra. A metastable (β) version of MoO3 with a WO3-like structure is also known. The enzymes xanthine oxidase and aldehyde oxidase both require molybdenum as a cofactor. It has a soft white powder with orthorhombic crystals; when heated, it becomes yellow; density 4.69 g/cm3 at 21°C; melts at 795°C without decomposition to a dark yellow liquid; vapor pressure 20 torr at 851°C and 200 torr at 1,014°C; boils at 1,155°C.

Molybdenum trioxide dissolves in acids and alkalies and is sparingly soluble in cold water (1.066 g/L at 18°C) and moderately soluble in hot water (20.55 g/L at 70°C). Roasting molybdenum disulfide, the most common ore of molybdenum, produces MoO3:

The dihydrate is made in the laboratory by acidifying sodium molybdate aqueous solutions with perchloric acid:

The dihydrate quickly loses water to become the monohydrate, which is brilliant yellow in color. Pure molybdenum trioxide is employed in the production of chemicals and catalysts, and the technical product is utilized as an alloying agent in steel. Molybdic acid is formed when it dissolves slightly in water. It dissolves in the base to provide the molybdate anion. The sulfide is roasted in a multiple-hearth roaster with temperature and airflow regulated. To achieve high purity oxide, the resulting combination is sublimed.

With chlorine trifluoride, lithium, potassium, and sodium, molybdenum trioxide react strongly. Combines easily with acids and bases to produce a variety of polymeric compounds. Interhalogens and metals are incompatible. When molten magnesium is heated, it causes a powerful explosion. Dry chemicals, carbon dioxide, or Halon extinguishers can be used to put out fires caused by this substance. Pure molybdenum trioxide, a byproduct of the roasting of molybdenum disulfide, is used as a corrosion-resistant alloy component. Molybdenum metal is made from chemically pure molybdenum trioxide.

Many surface waters contain trace amounts of soluble molybdate ions, usually as a result of industrial waste. Molybdenum trioxide is a component of the co-catalyst used in the commercial synthesis of acrylonitrile from propene and ammonia oxidation. Although there are no flash point data for Molybdenum trioxide, it is most likely non-flammable. It’s utilized in catalyst formulations to extract nitrogen-containing chemicals from petroleum fractions and desulfurize petroleum feedstocks.

Preparation of different molybdate salts and as reagents for chemical analysis are two further use for this oxide. MoO3 is of interest in electrochemical devices and displays because to its layered structure and ease of Mo(VI)/Mo(V) interaction. In addition to agriculture, molybdenum trioxide is used in the production of metallic molybdenum, ceramic glazes, enamels, pigments, and analytical chemistry. It’s also been proposed as a possible antimicrobial agent, for example in plastics.