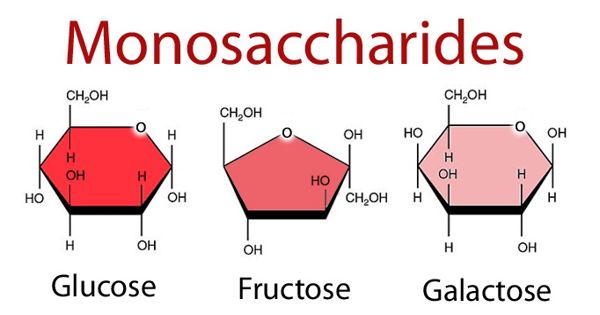 Monosaccharide – a most basic form of carbohydrates

Monosaccharides are the simplest form of carbohydrate and cannot be further hydrolyzed to smaller subunits.

These can by combined through glycosidic bonds to form larger carbohydrates, known as oligosaccharides or polysaccharides. Examples of monosaccharides include glucose (dextrose), fructose, galactose, and ribose. Monosaccharides are the building blocks of disaccharides like sucrose (common sugar) and polysaccharides (such as cellulose and starch). These are polyhydroxy aldehydes or ketones; that is, they are molecules with more than one hydroxyl group (―OH), and a carbonyl group (C=O) either at the terminal carbon atom (aldose) or at the second carbon atom (ketose). The monosaccharide which contains aldehyde is known as aldose and those which contain a ketone group are known as a ketose. They are used as a source of energy in respiration.

Glucose, fructose and galactose are the three monosaccharides important in nutrition. These single sugar molecules contain 6 carbon atoms, 12 hydrogen atoms and 6 oxygen atoms. Further, each carbon atom that supports a hydroxyl group (except for the first and last) is chiral, giving rise to a number of isomeric forms all with the same chemical formula. Among these three common monosaccharides, glucose is of most significance as it always exists as one of the two sugar molecules found in a disaccharide, plus it is the basic unit that makes up starch and glycogen. Furthermore, it is worth mentioning that our brain is almost exclusively dependent on glucose as energy source.

For instance, galactose and glucose are both aldohexoses, but they have different chemical and physical properties. They are important building blocks for large molecules. A monosaccharide is a type of monomer, or molecule that can combine with like molecules to create a larger polymer. The resulting monosaccharide is a crystalline water-soluble solid.