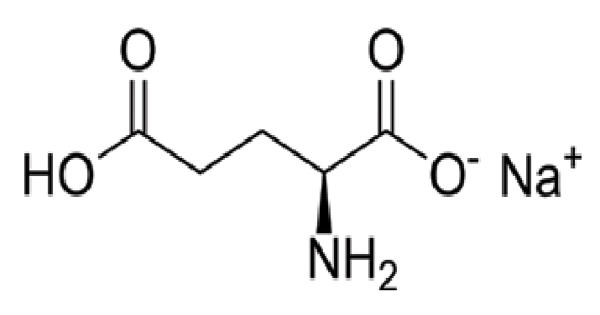 Monosodium Glutamate (MSG) is one of the most widely used food additives in commercial foods. It is also known as sodium glutamate, is the sodium salt of glutamic acid. It is a flavor enhancer commonly added to Chinese food, canned vegetables, soups, and processed meats. MSG is found naturally in some foods including tomatoes and cheese. MSG is derived from the amino acid glutamate, or glutamic acid, which is one of the most abundant amino acids in nature. Chemically, MSG is a white crystalline powder that resembles table salt or sugar. It combines sodium and glutamic acid, known as the sodium salt.

It is usually a white powder. Water ionizes it into free sodium ions and glutamic acid, which is an organic compound consisting of five carbon atoms. It has a carboxylic (-COOH) group and an amino (-NH2) group attached to an “alpha” carbon atom (a carbon atom joined directly to the -COOH group). MSG has almost same structure with glutamate. The difference is that one hydrogen atom at the carboxylic chain has been replaced with a sodium atom, hence, the name monosodium glutamate. Glutamic acid is naturally present in our bodies, and in many foods and food additives.

MSG was first prepared in 1908 by Japanese biochemist Kikunae Ikeda, who was trying to isolate and duplicate the savory taste of kombu, an edible seaweed used as a base for many Japanese soups. Its application has increased over time and it is found in many different ingredients and processed foods obtainable in every market or grocery store. MSG balances, blends, and rounds the perception of other tastes. MSG has been linked with obesity, metabolic disorders, Chinese Restaurant Syndrome, neurotoxic effects and detrimental effects on the reproductive organs.