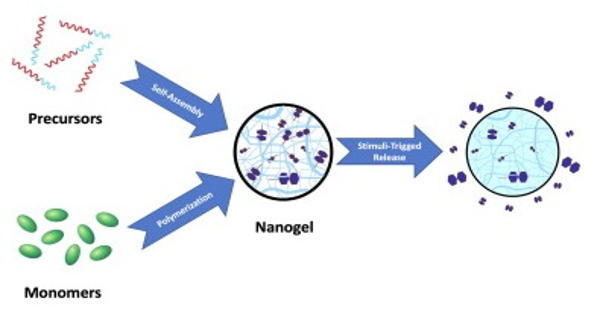 A nanogel is a nanoparticle composed of a hydrogel—a crosslinked hydrophilic polymer network. Nanogels are most often composed of synthetic polymers or biopolymers which are chemically or physically crosslinked. They are very promising carriers among other novel drug delivery vehicles for utilization in different therapeutics, diagnostics, macromolecules, and others. They are usually defined as aqueous dispersions of nanosized polymeric particles formed after physical or chemical cross-linking procedures. Nanogel-based nanoplatforms have become a tremendously promising system of drug delivery.

“Nanogels are very promising carriers among other novel drug delivery vehicles for utilization in different therapeutics, diagnostics, macromolecules, and others.”

Nanogels are usually in the tens to hundreds of nanometers in diameter. They are nanoparticles composed of a cross-linked hydrophilic polymer network. They are essentially the same thing but are on a scale of 20-200 nm. Most nanogels are synthesized via some form of the emulsion polymerization reaction. Like hydrogels, the pores in nanogels can be filled with small molecules or macromolecules, and their properties, such as swelling, degradation, and chemical functionality can be controlled. They present high entrapment efficiencies, good stability, and can be designed as sensitive to environmental factors, such as ionic strength, pH, or temperature. 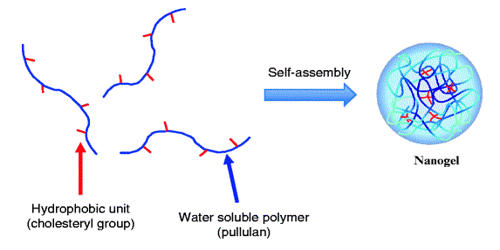 Potential applications of nanogels include drug delivery agents, contrast agents for medical imaging, nano actuators, and sensors. They have been widely used as drug-delivery systems due to their good properties. Many nanogels can also be conjugated with functional groups and/or antibodies which enables them to be used in targeted drug delivery approaches.

Nanogels in the biomedical field is promising and innovative materials as dispersions of hydrogel nanoparticles based on crosslinked polymeric networks that have been called as next-generation drug delivery systems due to their relatively high drug encapsulation capacity, uniformity, tunable size, ease of preparation, minimal toxicity, stability in the presence of serum, and stimuli responsiveness. They are not to be confused with Nanogel aerogel, a lightweight thermal insulator, or nanocomposite hydrogels (NC gels), which are nanomaterial-filled, hydrated, polymeric networks that exhibit higher elasticity and strength relative to traditionally made hydrogels.