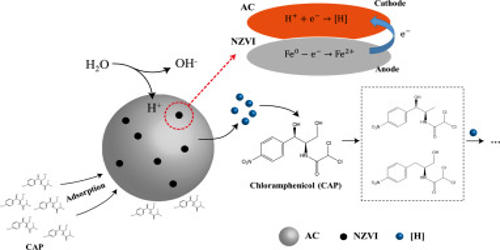 Nanoscale iron particles are sub-micrometer particles of iron metal. They are highly reactive because of their large surface area. In the presence of oxygen and water, they rapidly oxidize to form free iron ions. They are widely used in medical and laboratory applications and have also been studied for remediation of industrial sites contaminated with chlorinated organic compounds.

Nanoscale iron particles are easily transportable through groundwater, allowing for in situ treatment. Nanoparticles of titanium oxide used in sunscreens, for example, have the same chemical composition as the larger white titanium oxide particles used in conventional products for decades, but nanoscale titanium oxide is transparent. Additionally, the nanoparticle-water slurry can be injected into the contaminated area and stay there for long periods of time. These factors combine to make this method cheaper than the most currently used alternative.

Nanoscale materials are a broadly defined set of substances that have at least one critical dimension less than 100 nanometers and possess unique optical, magnetic, or electrical properties. Researchers have found that although metallic iron nanoparticles remediate contaminants well, they tend to agglomerate on the soil surfaces. In response, carbon nanoparticles and water-soluble polyelectrolytes have been used as supports to the metallic iron nanoparticles. The hydrophobic contaminants adsorb to these supports, improving permeability in sand and soil. Nanoparticles can contribute to stronger, lighter, cleaner, and “smarter” surfaces and systems. At the nanoscale, the properties of particles may change in unpredictable ways.

In field tests have generally confirmed lab findings. However, research is still ongoing and nanoscale iron particles are not yet commonly used for treating ground contamination. In medical sciences, nanostructures with magnetic properties have become particularly interesting for potential applications in diagnosis, drug delivery, cell separation, thrombolysis, and cancer treatment.