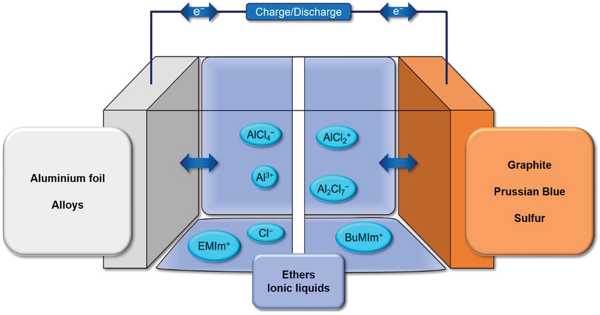 New Salts Increase the Standard for Technology for Ion Lithium

The market for high-capacity lithium-ion batteries (LIB) in electric vehicles has grown. Lithium-ion batteries (LIB) are widely used as rechargeable batteries due to their high theoretical energy density and long life. Because of the increased demand for electric vehicles and energy storage devices, the demand for high-power, high-capacity LIB has increased. To meet this demand, the energy density of LIB must be increased. New electrode materials are being researched and developed for this purpose.

Lithium-ion batteries are poised to become the dominant power source in electric vehicles and other applications in the near future—but the battery materials currently in use fall short in terms of safety and performance, impeding the development of the next generation of high-performance batteries. The development of the electrolyte, in particular, poses a significant challenge for higher power batteries suitable for energy storage and vehicle applications.

Scientists at Monash University’s School of Chemistry, led by Professor Doug MacFarlane and Dr. Mega Kar, have developed new chemistry to address this challenge in collaboration with the local company Calix Ltd.

Lithium-ion batteries are set to take a dominant role in electric vehicles and other applications in the near future—but the battery materials, currently in use, fall short in terms of safety and performance and are holding back the next generation of high-performance batteries.

“The lithium salt currently used in lithium-ion batteries is lithium hexafluorophosphate, which is toxic as well as a fire and safety hazard,” Professor MacFarlane explained. “This risk can be mitigated to some extent in smaller portable devices. However, the potential hazard is greatly increased in large battery packs, such as those used in electric vehicles and outdoor grid-scale energy storage systems. Higher voltage and power batteries are also being considered, but they will be unable to use the hexafluorophosphate salt.”

In a paper published in Advanced Energy Materials, chemists describe a novel lithium salt that could overcome electrolyte design challenges and replace the hexafluorophosphate salt.

“Our goal has been to develop safe fluoroborate salts that are unaffected even when exposed to air,” said lead study author Dr. Binayak Roy, who also works at Monash University’s School of Chemistry. “The main challenge with the new fluoroborate salt was to synthesize it with battery-grade purity, which we were able to achieve through a recrystallization process,” he explained.

When placed in a lithium battery with lithium manganese oxide cathodes, the cell cycled for over 1000 cycles, even after atmospheric exposure, an unthinkable feat when compared to the hyper-sensitive hexafluorophosphate salt.

When combined with a novel cathode material in a high voltage lithium battery, this electrolyte outperformed the conventional salt, according to Dr. Roy. Furthermore, at higher voltages, as required for next-generation batteries, the salt was found to be very stable on aluminum current collectors.

The study is the result of a collaborative effort between the Australian Research Council (ARC) Training Centre for Future Energy Storage Technologies and the University of Sydney. StorEnergy is a federally funded Industry Transformation Training Centre that aims to train and skill the next generation of Australian energy workers while also promoting industry-university collaboration.

The study was carried out in collaboration with Calix Ltd., a company based in Victoria/NSW that manufactures high-quality manganese-based battery materials from minerals sourced in Australia. The research will help Calix achieve its goal of large-scale fabrication of Australian-based Li-ion batteries, with the goal of deploying grid-scale energy storage systems in Australia.

“Calix is developing a platform technology to produce high-performance, cost-competitive battery materials in Australia,” said Dr. Matt Boot-Handford, General Manager for R&D at Calix. Through StorEnergy, we are collaborating closely with our research partners at Monash and Deakin to support the development of electrolyte systems compatible with Calix’s electrode materials.

The superior electrochemical performance and stability demonstrated by the Monash team’s new electrolyte system in conjunction with Calix’s lithium manganese oxide electrode material is an exciting and significant milestone that brings us one step closer to commercializing batteries using Calix next-generation electrode materials.

“We hope to convert these new anions into thermally stable, non-flammable liquid salts in the near future, making them useful for high-temperature batteries,” Dr. Kar said. “With today’s climate conditions, designing such battery technologies with safety and stability will be critical in implementing a sustainable grid-scale energy solution in Australia.”

When combined with a novel cathode material in a high voltage lithium battery, this electrolyte outperformed the conventional salt, according to the researcher. Furthermore, at higher voltages, as required for next-generation batteries, the salt was found to be very stable on aluminum current collectors. According to the researcher, they hope to convert these new anions into thermally stable, non-flammable liquid salts in the near future, making them useful for high-temperature batteries.