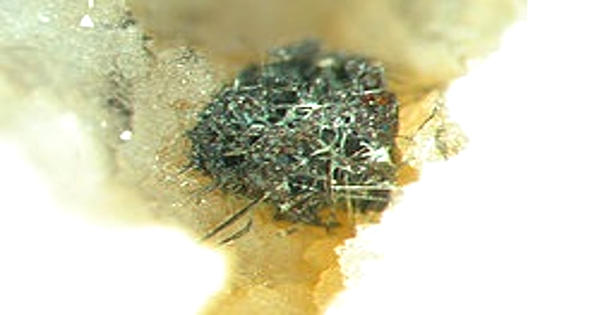 Nickel sulfide is an inorganic compound with the formula NiS. Nickel sulfide minerals such as pentlandite can, in general, be separated from their gangue by flotation using a thiol group of collectors like xanthates and alkyl dithiophosphates in the presence of a variety of activators, depressants, and dispersants. It is a black solid that is produced by treating nickel(II) salts with hydrogen sulfide. It is a dark green to black colored, crystalline inorganic compound that produces toxic gases upon heating.

Many nickel sulfides are known, including the mineral millerite, which also has the formula NiS. It is an insoluble carcinogen that is thought to act through the production of free radicals. Nonstoichiometric forms of nickel sulfide are known, e.g., Ni9S8 and Ni3S2.

Like many related materials, nickel sulfide adopts the nickel arsenide motif. In this structure, nickel is octahedral and the sulfide centers are in trigonal prismatic sites.

The precipitation of solid black nickel sulfide is a mainstay of traditional qualitative inorganic analysis schemes, which begins with the separation of metals on the basis of the solubility of their sulfides. Such reactions are written:

Many other more controlled methods have been developed, including solid state metathesis reactions (from NiCl2 and Na2S) and high temperature reactions of the elements.

The mineral millerite is also a nickel sulfide with the molecular formula NiS, although its structure differs from synthetic stoichiometric NiS due to the conditions under which it forms. It occurs naturally in low-temperature hydrothermal systems, in cavities of carbonate rocks, and as a byproduct of other nickel minerals.

Nickel sulfide is used in lithium batteries, as a catalyst in the petrochemical industry and is used in the manufacture of silicate-oxide nickel ores. Exposure to this substance can cause severe dermatitis, skin and asthma-like allergies and affects the lungs, kidneys, gastrointestinal tract and neurological system.