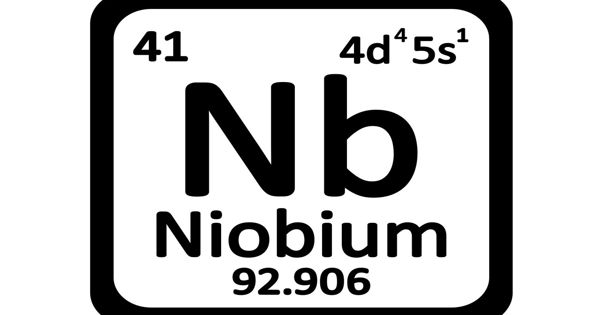 Niobium is a transition metal in Group 5 (VB) of the periodic table. It also is known as columbium, which is a chemical element with the symbol Nb (formerly Cb) and atomic number 41. It is a chemical element, the refractory metal of Group 5 (Vb) of the periodic table, used in alloys, tools and dies, and superconductive magnets. It is a light grey, crystalline, and ductile transition metal. It is a silvery metal that is very resistant to corrosion due to a layer of oxide on its surface.

Niobium is a light grey, crystalline, and ductile transition metal. It has a wide range of uses from use in hypoallergenic jewelry to jet engines to superconducting magnets.

Niobium is a shiny, white metal that typically forms a film on its surface when exposed to air, turning shades of blue, green, or yellow, according to Chemicool. Pure niobium has a Mohs hardness rating similar to that of pure titanium, and it has similar ductility to iron. It has a wide range of uses from use in hypoallergenic jewelry to jet engines to superconducting magnets. Niobium oxidizes in the earth’s atmosphere very slowly, hence its application in jewelry as a hypoallergenic alternative to nickel. It was discovered in 1801 by English scientist Charles Hatchett. 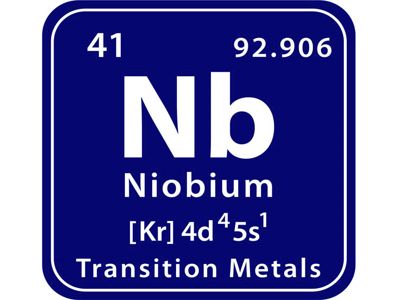 Niobium is often found in the minerals pyrochlore and columbite, hence the former name “columbium”. It is named for the Greek goddess of tears, Niobe, who was the daughter of King Tantalus, according to the Royal Society of Chemistry, due to the element’s similarities to tantalum (named for the king). It is a shiny gray metal with a melting point of 2,468°C (4,474°F) and a boiling point of 4,927°C (8,901°F). Its density is 8.57 grams per cubic centimeter.

Other applications of niobium include welding, nuclear industries, electronics, optics, numismatics, and jewelry. People who wear pierced earrings or similar forms of jewelry will not develop skin problems from niobium alloy jewelry. In the last two applications, the low toxicity and iridescence produced by anodization are highly desired properties. Niobium alloys are also used in the construction of superconducting magnets. It is considered a technology-critical element.