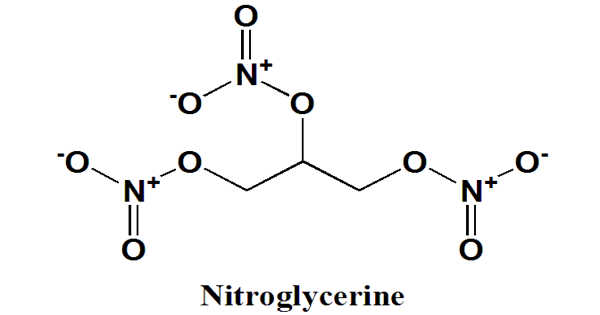 Nitroglycerin is a nitroglycerol that is glycerol with nitro groups replacing the hydrogen atoms of all three hydroxy groups. It is a dense, colorless, oily, explosive liquid that is commonly produced by nitrating glycerol with white fuming nitric acid under conditions appropriate for the formation of the nitric acid ester. It is also known as nitroglycerine, trinitroglycerin (TNG), nitro, glyceryl trinitrate (GTN), or 1,2,3-trinitroxypropane.

It is a venerable explosive as well as a life-saving drug in small doses. Nitroglycerin is a colorless, oily, slightly toxic liquid with a sweet, burning flavor. The risks associated with producing large amounts of nitroglycerin have been greatly reduced by the widespread use of continuous nitration processes. It was created in 1846 by chemist Ascanio Sobrero at the University of Turin, who was hesitant to publish his findings due to the compound’s extreme flammability. Following a series of mishaps, the manufacture and distribution of the pure liquid were soon prohibited in a number of jurisdictions.

Although the substance is chemically an organic nitrate compound rather than a nitro compound, the traditional name is retained. Ascanio Sobrero invented nitroglycerin in 1847, and it has since been used as an active ingredient in the manufacture of explosives, specifically dynamite, and as such it is used in the construction, demolition, and mining industries. It has been used by the military as an active ingredient and gelatinizer for nitrocellulose in solid propellants such as cordite and ballistite since the 1880s. It is a key component in reloaders’ use of double-based smokeless gunpowders. Combined with nitrocellulose, hundreds of powder combinations are used by rifle, pistol, and shotgun reloaders.

Nitroglycerin has been used in medicine for over 130 years as a potent vasodilator (vascular system dilation) to treat heart conditions such as angina pectoris and chronic heart failure. Though it was previously known that these beneficial effects resulted from nitroglycerin being converted to nitric oxide, a powerful venodilator, the enzyme responsible for this conversion was only discovered in 2002 to be mitochondrial aldehyde dehydrogenase (ALDH2). Nitroglycerin is available in a variety of forms, including sublingual tablets, sprays, ointments, and patches.

After the Swedish chemist Alfred B. Nobel developed dynamite in the 1860s by combining liquid nitroglycerin with an inert porous material such as charcoal or diatomaceous earth, the safe use of nitroglycerin as a blasting explosive became possible. Nitroglycerin plasticizes collodion (a type of nitrocellulose) to form blasting gelatin, a highly explosive material. Nobel’s discovery of this action resulted in the creation of ballistite, the first double-base propellant, and precursor to cordite.