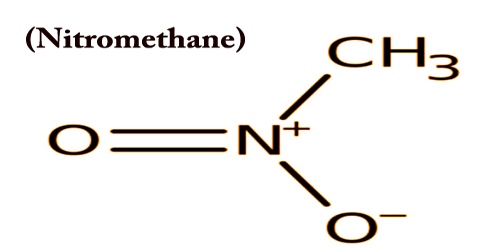 Nitromethane, sometimes shortened to just Nitro, is a strongly polar, oily liquid with the chemical formula CH3NO2. This is used in organic chemical synthesis as a solvent or reactant, and as a fuel for motorsports, rockets, recreational aircraft, and the like. It is commonly used as an intermediate in organic synthesis in the manufacture of pharmaceuticals, pesticides, explosives, fibers, and coatings. It is formed in a high-temperature reaction between propane and nitric acid, alongside other nitroalkanes.

Nitromethane is a highly flammable and colorless explosive substance with a heavy, unpleasant odor. It’s also used in various motorsports and hobbies as a fuel additive, e.g. Top Fuel drag racing and miniature internal combustion engines in aircraft model radio control, control panel, and free flight. Nitromethane is an explosive that can be detonated by shock or heat, and by the presence of other chemicals, particularly amines and acids, the chemical can become more susceptible to detonation.

The flashpoint of nitromethane is 95°F; can decompose violently if heated intensely when polluted. Industrially, it is produced by combining propane and nitric acid at 350–450°C (662–842°F) in the gas phase. This exothermic reaction produces the four nitroalkanes of industrial significance: nitromethane, nitroethane, 1-nitropropane, and 2-nitropropane. Nitromethane forms inorganic bases of salts, and the dry salts are explosive. The reaction involves free radicals, including the alkoxyl radicals of the type CH3CH2CH2O, which arise via homolysis of the corresponding nitrite ester.

Nitromethane may be a primary nitroalkane that’s methane within which one in each of the hydrogens is replaced by a nitro group; a polar solvent (b.p. 101 ℃), it’s a vital starting material in organic synthesis. It may be prepared in other methods that are of instructional value. The reaction of sodium chloroacetate with sodium nitrite in aqueous solution produces this compound:

Most of the nitromethane produced in the United States (85% to 90%) is employed within the synthesis of nitromethane derivatives used as pharmaceuticals, agricultural soil fumigants, and industrial antimicrobials. Nitromethane is primarily used as a stabilizer for chlorinated solvents which are used in dry cleaning, processing of semiconductors, and degreasing. It is also used as rocket fuel and radio-controlled models. Nitromethane formerly was utilized in the explosives industry as a component during a binary explosive formulation with nitrate and in shaped charges, and it had been used as a chemical stabilizer to forestall decomposition of assorted halogenated hydrocarbons.

Nitromethane is a relatively acidic carbon acid; it has a pKa of 17.2 in DMSO solution. It has a role as an EC 4.3.1.3 (histidine ammonia-lyase) inhibitor, a polar aprotic solvent, and an explosive; it is a primary nitroalkane and a volatile organic compound. Nitromethane is slow to deprotonate; protonation of the conjugate base O2NCH2−, which is nearly isosteric with nitrate, occurs initially at oxygen.

Nitromethane exposure irritates the skin and affects the central nervous system which causes nausea, dizziness, and narcosis. At temperatures of 370-450 °C and pressures of 8-12 atmospheres, nitromethane, nitroethane, and 1- and 2-nitropropane are formed and then separated by distillation. Nitromethane can be purified by washing the solid with cold diethyl ether below its freezing level, followed by distillation. Nitromethane is fairly assumed to be a human carcinogen based on ample proof of carcinogenicity from laboratory animal studies.