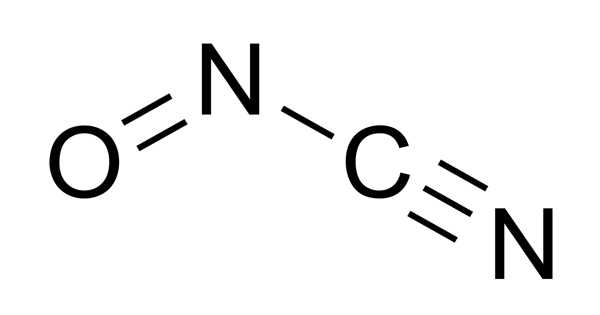 The compound with the molecular formula ONCN is nitrosyl cyanide. It’s a gas that’s both blue and green. The compound has been identified as a byproduct of cyanamide oxidation catalyzed by the enzyme glucose oxidase. It is rapidly absorbed through the skin, mucosal, and respiratory membranes, and is quickly distributed throughout the blood.

Cyanide is a chemical compound that belongs to the CN group. The cyano group is composed of a carbon atom triple-bonded to a nitrogen atom. It is a toxic substance, owing to its affinity for the terminal cytochrome oxidase in the mitochondrial respiratory pathway, which reduces tissue oxygen utilization.

A molecule’s chemical structure includes the arrangement of atoms as well as the chemical bonds that hold the atoms together. There are three bonds in the Nitrosyl cyanide molecule (s) There are three non-H bonds, two multiple bonds, one double bond, one triple bond, and one nitroso group (aliphatic).

Low-temperature reactions of nitrosyl chloride and silver cyanide can produce the compound. It is not usually isolated, but rather trapped by Diels-Alder reactions, such as those with butadiene. Cycloadditions take place across the N=O bond. With 9,10-dimethylantracene, it forms a reversible adduct.

Cyanide has a high nucleophilicity by nature and serves as a good nucleophile as well as a strong ligand to transition metal ions. These chemical properties of cyanide were used to detect the anion optically.

At low temperatures, nitrosyl chloride and silver cyanide react to form nitrosyl cyanide (ONCN), which then undergoes 1,4-cycloaddition reactions with conjugated dienes to form the corresponding 2-cyano-3,6-dihydro-2H-1,2-oxazines. Thus, with a small amount of nitrosyl cyanide, the alkaloid thebaine (1) formed a single adduct (2; R = H, X = CN) convertible into 14-cyanamidocodeinone (3); with an excess of nitrosyl cyanide, the related N-cyanomethyl derivative (2; R = X = CN) was formed. N-cyano-oxazines have also been synthesized from buts-1,3-diene and its derivatives 2,3-dimethyl, 1-methoxycarbonyl-4-methyl, 1-cyano-4-methyl, and 1,4-bisethoxycarbonyl.

Because cyanide is toxic to humans and other living things, the US EPA regulates its concentration in drinking water, which is set at 0.2 mg/L for cyanide-containing compounds. Because of the impact of cyanide on aquatic life, the amount that can be released in wastewater is also regulated.