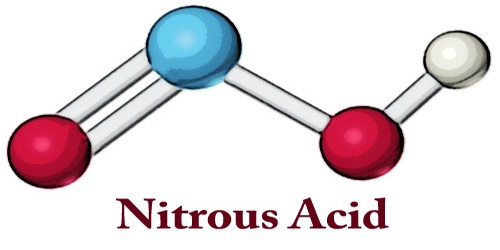 Nitrous acid (molecular formula HNO2) is a weak acid that exists only in solution. It can form water-soluble nitrites and stable esters. It is useful in chemistry in converting amines into diazonium compounds, which are used in making azo dyes. It is usually prepared by acidifying a solution of one of its salts, the nitrites, which are more stable

Nitrous acid is a mixture of nitric acid and nitrous gas but with a smaller proportion of oxygen than what exists in nitric acid. Nitrous acid was discovered by Scheele. It is obtained by distilling perfectly dry nitrate of lead in a retort, fitted with a receiver. A liquid comes over which is nitrous acid.

Nitrous acid (as sodium nitrite) is used as part of an intravenous mixture with sodium thiosulfate to treat cyanide poisoning. It is on the World Health Organization’s List of Essential Medicines, a list of the most important medications needed in a basic health system. There is also research to investigate its applicability towards treatments for heart attacks, brain aneurysms, pulmonary hypertension in infants, and Pseudomonas aeruginosa infections.

In the gas phase, the planar nitrous acid molecule can adopt both a cis and a trans form. The trans form predominates at room temperature, and IR measurements indicate it is more stable by around 2.3 kJ/mol.

Nitrous acid is strongly acidic, extremely volatile and rises in thick fumes; boils at a low temperature of 82oC, and the specific gravity is 1.45. In vapor state, nitrous acid remains unchanged by the action of heat, but when mixed with water an effervescence takes place with the evolution of nitrous gas. Nitrous acid in its fuming state is totally irrespirable but supports the combustion of phosphorus or charcoal when these are introduced into it in a state of combustion.

Nitrous acid is usually generated by the acidification of aqueous solutions of sodium nitrite with a mineral acid. It can also be produced by dissolving dinitrogen trioxide in water according to the equation:

Nitrous acid decomposes into nitric oxide, NO, and nitric acid, HNO3. It may react as either an oxidizing or a reducing agent; that is, its nitrogen atom may either gain or lose electrons in reactions with other substances. Nitrous acid, for example, oxidizes iodide ion to elemental iodine but reduces bromine to bromide ion.

Nitric oxide acts as a powerful vasodilator, producing vascular smooth muscle relaxation through activation of soluble guanylate cyclase and the subsequent cyclic guanylyl triphosphate mediated signalling cascade. In industry, nitrous acid has many applications. One important application of this compound is its use in the preparation of diazonium salts which then react to form azo-coloring with aromatic amines and phenols.

Nitrous acid is involved in the ozone budget of the lower atmosphere, the troposphere. The heterogeneous reaction of nitric oxide (NO) and water produces nitrous acid. When this reaction takes place on the surface of atmospheric aerosols, the product readily photolyzes to hydroxyl radicals.