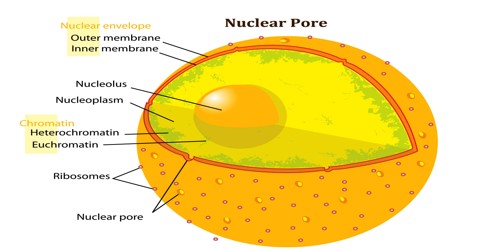 There are about an average of 2000 nuclear pore complexes (NPCs), in the nuclear envelope of a vertebrate cell, but it varies depending on cell type and the stage in the life cycle. The proteins that make up the nuclear pore complex are known as nucleoporins. The nuclear pore complex (NPC) constitutes the exclusive means of nucleocytoplasmic transport in eukaryotes during interphase. NPCs allow the passive diffusion of ions and small molecules (up to about 20 kDa or 5 nm) and the active, nuclear transport receptor-mediated bidirectional transport of macromolecules such as proteins, RNAs, ribonucleoprotein (RNPs), and ribosomal subunits (up to about 10 MDa) across the double-membrane nuclear envelope. NPC components collectively referred to as nucleoporins (NUPs), can play the role of both NPC structural components and of docking or interaction partners for transiently associated nuclear transport factors. The NPC is composed of at least 30 distinct subunits, shows 8-fold rotational symmetry with specialized structures on the cyto- and nucleoplasmic side and in the nuclear envelope embedded core. The MW varies from about 44-60 MDa in S. cerevisiae to 60-120 MDa in vertebrates, yet the overall architecture is conserved. The center of the pore often appears to contain a plug-like structure. It is yet unknown whether this corresponds to an actual plug or is merely cargo caught in transit. Nuclear Pore Complex (NPC) is one of the largest protein complexes in the cell and easily recognizable using scanning electron microscopy (EM). Early EM studies revealed eightfold rotational ring symmetry for the entire structure. In addition, the main NPC structure contains rings that are situated on its cytoplasmic and nucleoplasmic sides, giving the NPC an apparent twofold symmetry across the nuclear membrane. A recent electron tomographic study has delineated the structure of the core NPC scaffold at a resolution of 3.2 nm. This work, together with other studies, shows that the NPC has a thickness of ∼50 nm, an outer diameter of ∼80–120 nm and an inner diameter of ∼40 nm. In addition, the obtained images reveal that the NPC contains a structure, resembling a basket that extends into the nucleoplasm and filaments that extend into the cytoplasm.

A high-resolution structure of the NPC, in which the position of each individual protein is resolved, is a formidable goal for structural biologists.

Some molecules are simply small enough to pass through the pores, but larger molecules must be recognized by different signal sequences before being allowed to diffuse through the nuclear pores via a concentration gradient. Some substances, like carbohydrates, lipids, and even ribosomes are able to pass through quite easily, while RNA and some proteins must be “cleared” for release through signal sequences within the nucleus. The import and export of proteins across the nuclear membrane is regulated by a cycle of interactions between protein cargo, NTRs (e.g. importins, exportins, transportins and karyopherins) and the small GTPase Ran, which regulates the ability of both importins and exportins to transport their cargo. For a protein to actively pass through the NPC, it must contain a nuclear localization signal (NLS) sequence. Although the NLS can be complex, the classic NLS is a stretch of basic residues. Simply adding an NLS to a non-nuclear protein is often sufficient to localize that protein into the nucleus. Recognition of the NLS of a cargo is the first step in assembling an import-complex. Canonical nuclear import involves the recognition of the NLS by the adaptor protein importin-α, followed by binding of the karyopherin importin-β, thereby forming a trimeric import complex. Importin-β acts as the transport factor and carries the cargo through the NPC. In other cases, such as when the cargo contains an atypical NLS, importin-β binds to the cargo directly. Through either direct interaction with the NLS or through an adaptor protein, the NTRs ultimately determine which cargo is permitted to pass through the nuclear pore.

Whereas metabolites, ions and molecules smaller than ∼40 kDa can pass freely across the nuclear envelope, larger macromolecules (e.g. proteins, mRNA, tRNA, ribosome subunits and viruses) typically cannot diffuse, but must be actively transported through the NPC.