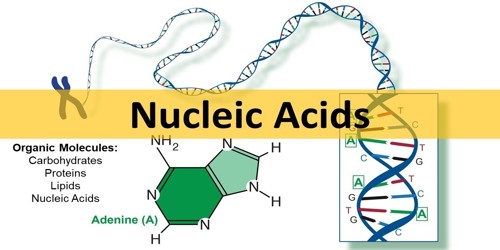 The nucleic acids are made of nucleotides. DNA and RNA are made up of monomers also known as nucleotides. A nucleotide is made of a nitrogenous base, sugar with five carbon atoms and a phosphate group. This compound was neither a protein nor lipid nor a carbohydrate; therefore, it was a novel type of biological molecule. Each nucleotide is made up of three components: a nitrogenous base, a pentose sugar, and a phosphate group. They are the most important macromolecules for the continuity of life. 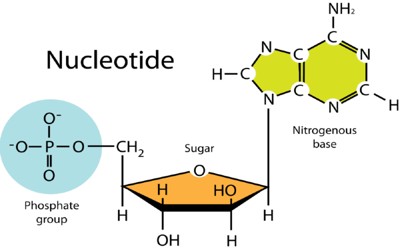 Nucleic acids allow organisms to transfer genetic information from one generation to the next. When a cell divides, its DNA is copied and passed from one cell generation to the next generation. DNA is composed of a phosphate-deoxyribose sugar backbone and the nitrogenous bases adenine (A), guanine (G), cytosine (C), and thymine (T). It is found in the nucleus of eukaryotes and in the organelles, chloroplasts, and mitochondria. The order, or sequence, of the nucleotides in DNA allows nucleic acid to encode an organism’s genetic blueprint.

DNA is organized into chromosomes and found within the nucleus of our cells. Its function in any cell is to carry the sequence of bases which will be transcribed into RNA. The function of RNA is much more difficult to explain. RNA has ribose sugar and the nitrogenous bases A, G, C, and uracil (U). One well-known function is for messenger RNA to be translated into proteins, mainly enzymes. But there are other types of RNA, and these are called non-coding RNAs.