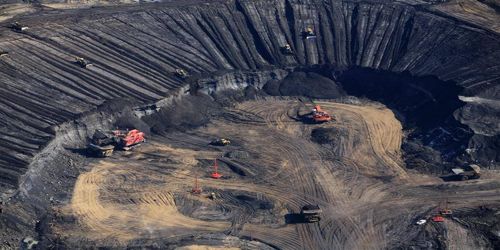 A mixture of sand or clay, water and extremely viscous petroleum called bitumen. Often referred to as unconventional oil. Oil sands are a combination of clay, sand, water, and bitumen, heavy black viscous oil. Tar sands can be mined and processed to extract the oil-rich bitumen, which is then refined into oil. The bitumen in tar sands cannot be pumped from the ground in its natural state; instead tar sand deposits are mined, usually using strip mining or open pit techniques, or the oil is extracted by underground heating with additional upgrading. Where are they found?

Oil sand can be found in several locations around the globe, including Venezuela, the United States and Russia, but the Athabasca deposit in Alberta is the largest, most developed and utilizes the most technologically advanced production processes.

Much of the world’s oil (more than 2 trillion barrels) is in the form of tar sands, although it is not all recoverable. While tar sands are found in many places worldwide, the largest deposits in the world are found in Canada (Alberta) and Venezuela, and much of the rest is found in various countries in the Middle East. In the United States, tar sands resources are primarily concentrated in Eastern Utah, mostly on public lands. The in-place tar sands oil resources in Utah are estimated at 12 to 19 billion barrels. Tar sands deposits near the surface can be recovered by open pit mining techniques. New methods introduced in the 1990s considerably improved the efficiency of tar sands mining, thus reducing the cost. These systems use large hydraulic and electrically powered shovels to dig up tar sands and load them into enormous trucks that can carry up to 320 tons of tar sands per load.

After mining, the tar sands are transported to an extraction plant, where a hot water process separates the bitumen from sand, water, and minerals. The separation takes place in separation cells. Hot water is added to the sand, and the resulting slurry is piped to the extraction plant where it is agitated. The combination of hot water and agitation releases bitumen from the oil sand, and causes tiny air bubbles to attach to the bitumen droplets, that float to the top of the separation vessel, where the bitumen can be skimmed off. Further processing removes residual water and solids. The bitumen is then transported and eventually upgraded into synthetic crude oil. Steam assisted gravity drainage: Two pipes, one on top for steam, one under to catch oil – 60% recovery