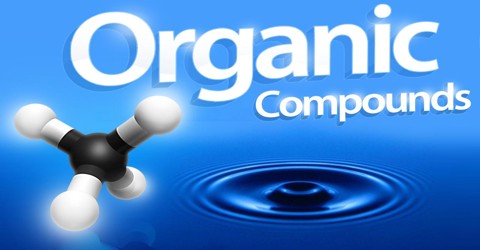 Organic Compound is any member of a large class of gaseous, liquid, or solid chemical compounds whose molecules contain carbon. The few carbon-containing compounds not classified as organic include carbides, carbonates, and cyanides. This is the theory that certain compounds could be synthesized only from their classical elements—earth, water, air, and fire—by the action of a “life-force” (vis vitalis) that only organisms possessed. Vitalism taught that these “organic” compounds were fundamentally different from the “inorganic” compounds that could be obtained from the elements by chemical manipulation. Organic Compounds, which are the compounds associated with life processes, are the subject matter of organic chemistry. Among the numerous types of organic compounds, four major categories are found in all living things: carbohydrates, lipids, proteins, and nucleic acids.

Almost all organisms use carbohydrates as sources of energy. In addition, some carbohydrates serve as structural materials. Carbohydrates are molecules composed of carbon, hydrogen, and oxygen; the ratio of hydrogen atoms to oxygen and carbon atoms is 2:1.

Lipids are organic molecules composed of carbon, hydrogen, and oxygen atoms. The ratio of hydrogen atoms to oxygen atoms is much higher in lipids than in carbohydrates. Lipids include steroids, the material of which many hormones are composed, waxes, and fats. The fats in adipose tissue contain much concentrated energy. Hence, they serve as a reserve energy supply to the organism. The enzyme lipase breaks down fats into fatty acids and glycerol in the human digestive system.

Proteins, among the most complex of all organic compounds, are composed of amino acids, which contain carbon, hydrogen, oxygen, and nitrogen atoms. Certain amino acids also have sulfur atoms, phosphorus, or other trace elements such as iron or copper.

Proteins are the major molecules from which living things are constructed. Certain proteins are dissolved or suspended in the watery substance of the cells, while others are incorporated into various structures of the cells. Proteins are also found as supporting and strengthening materials in tissues outside of cells. Bone, cartilage, tendons, and ligaments are all composed of proteins.

The nucleic acids are composed of smaller units called nucleotides. Each nucleotide contains a carbohydrate molecule (sugar), a phosphate group, and a nitrogen-containing molecule that, because of its properties, is a nitrogenous base.