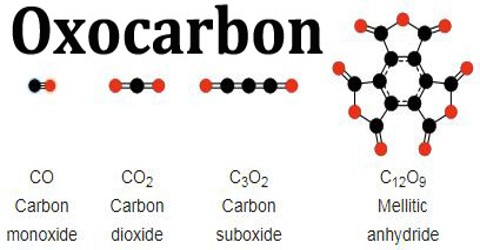 Oxocarbon is a compound, which is containing only atoms of carbon and oxygen. The simplest and most common oxocarbons are carbon monoxide and carbon dioxide. Carbon oxides, or oxocarbons, are a class of organic compounds containing only carbon and oxygen. The carbonate ion is the simplest oxocarbon anion, consisting of one carbon atom surrounded by three oxygen atoms in a trigonal planar arrangement. Many other stable or metastable oxides of carbon are known, but they are rarely encountered, such as carbon suboxide and mellitic anhydride. The inventory of oxocarbons appears to be steadily growing. The existence of graphene oxide and of other stable polymeric carbon oxides with unbounded molecular structures suggests that many more remain to be discovered.

Carbon dioxide (CO2) occurs widely in nature, and was incidentally manufactured by humans since pre-historical times, by the combustion of carbon-containing substances and fermentation of foods such as beer and bread. Carbon monoxide may occur in combustion, too, and was used (though not recognized) since antiquity for the smelting of iron from its ores. Oxalic acid can be determined spectrophotometrically, as it dissociates the chloranilate complex of zirconium (IV) at pH 2. The decrease in the absorbance at 335 nm is proportional to the amount of oxalic acid present. Optimum conditions for the method are described. The sensitivity of the method is high, allowing the determination of 0.035 ppm of oxalic acid. Because of the very high stabilities of the zirconium (IV) complexes of chloranilate or oxalate, few compounds interfere, particularly hydroxy acids. D-Glucose and alditols did not interfere, which could be useful in studies on solutions of biological interest. Linear Carbon Dioxides – One family of carbon oxides has the general formula CnO2, or O=(C=)nO — namely, a linear chain of carbon atoms, capped by oxygen atoms at both ends.

Linear Carbon Monoxides – Another family of oxocarbons are the linear carbon monoxides CnO. The first member, ordinary carbon monoxide CO, seems to be the only one that is practically stable in the pure state at room temperature.

Polymeric Carbon Oxides – The polymer is believed to be a linear chain of fused six-membered lactone rings, with a continuous carbon backbone of alternating single and double bonds. Physical measurements indicate that the mean number of units per molecule is about 5–6, depending on the formation temperature.

Another carbon-oxygen polymer, with C:O ratio 5:1 or higher, is the classical graphite oxide and its single-sheet version graphene oxide.