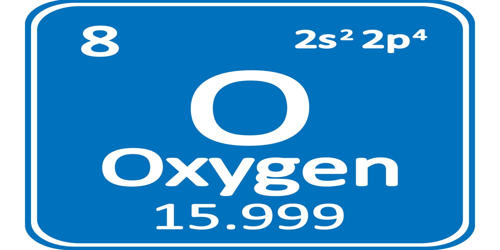 Oxygen is the chemical element with the symbol O and atomic number 8. In normal conditions it is a colorless, odorless, and insipid gas; it condensates in a light blue liquid. It is a member of the chalcogen group in the periodic table, a highly reactive nonmetal, and an oxidizing agent that readily forms oxides with most elements as well as with other compounds. Oxygen condenses at 90.20 K (−182.95 °C, −297.31 °F), and freezes at 54.36 K (−218.79 °C, −361.82 °F).

After hydrogen and helium, oxygen is the third-most abundant element in the universe by mass. High-purity liquid O2 is usually obtained by the fractional distillation of liquefied air. At standard temperature and pressure, two atoms of the element bind to form dioxygen, a colorless and odorless diatomic gas with the formula O2. Oxygen is a colorless, odorless, tasteless gas. It changes from a gas to a liquid at a temperature of -182.96°C (-297.33°F). Diatomic oxygen gas constitutes 20.95% of the Earth’s atmosphere. Oxygen makes up almost half of the Earth’s crust in the form of oxides.

Dioxygen provides the energy released in combustion and aerobic cellular respiration, and many major classes of organic molecules in living organisms contain oxygen atoms, such as proteins, nucleic acids, carbohydrates, and fats, as do the major constituent inorganic compounds of animal shells, teeth, and bone. Most of the mass of living organisms is oxygen as a component of water, the major constituent of lifeforms.

Oxygen is continuously replenished in Earth’s atmosphere by photosynthesis, which uses the energy of sunlight to produce oxygen from water and carbon dioxide. At 46 percent of the mass, oxygen is the most plentiful element in Earth’s crust. Another form (allotrope) of oxygen, ozone (O3), strongly absorbs ultraviolet UVB radiation and the high-altitude ozone layer helps protect the biosphere from ultraviolet radiation. However, ozone present at the surface is a byproduct of smog and thus a pollutant.

The greatest commercial use of oxygen gas is in the steel industry. Large quantities are also used in the manufacture of a wide range of chemicals including nitric acid and hydrogen peroxide. It can be separated from the air by fractionated liquefaction and distillation. The main applications of oxygen in order of importance are: